Our full set of predictions, statistics and match poll for GIF Sundsvall v Orgryte can be seen below - plus the latest betting odds.

GIF Sundsvall will play in this fixture after a 0-0 Superettan drawn result versus Ljungskile SK.

At least three goals per game were seen in 5 of the past 6 fixtures where GIF Sundsvall have played. Opposition teams scored 9 times in these games while Giffarna totted up 13. We shall soon see if that trend can be continued on here.

Coming into this meeting, GIF Sundsvall haven't lost in the league to Orgryte in their previous 6 matches.

Orgryte head into the meeting following a 4-1 Superettan win as they beat Östers IF in their last game.

The numbers tell their own story, and Orgryte have been scored against in 6 of their last 6 games, seeing opposing sides hit 11 goals in all. At the back, Sällskapet have clearly had some problems.

Looking at their past form shows that Orgryte:

Looking at their most recent head to head clashes dating back to 23/10/2005 shows us that GIF Sundsvall have won 3 of them & Orgryte 0, with the number of drawn results being 3.

A combined total of 12 goals were yielded between them in this period, with 8 of them from Giffarna and 4 coming from Sällskapet. The average goals per game has been 2.

The previous league game between these clubs was Superettan match day 6 on 11/07/2020 which ended up with the score at Orgryte 0-2 GIF Sundsvall.

The referee was Farouk Nehdi.

GIF Sundsvall boss Henrik Åhnstrand has a full complement, with no fitness worries at all coming into this game thanks to a fully healthy group to pick from.

Owing to a completely injury-free squad available to select from, Orgryte manager Keith Millen has zero fitness concerns to speak of coming into this clash.

We envisage that Orgryte will manage to breach the defence of this GIF Sundsvall side, however it isn’t expected to be as many as they will have scored against them.

We can see a close game with a 2-1 winning score for GIF Sundsvall after the 90. Should be a good one. 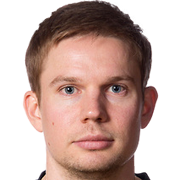 Mostly used in the Right Attacking Midfielder position, Johan Blomberg was born in Lund, Sweden. After having made a senior debut playing for Ängelholms FF in the 2009 season, the skilful Midfielder has contributed 6 league goals in this Superettan 2020 campaign so far from a total of 23 appearances.

We have made these GIF Sundsvall v Orgryte predictions for this match preview with the best intentions, but no profits are guaranteed. Please always gamble responsibly, only with money that you can afford to lose. Good luck!