Return to this page a few days before the scheduled game when this expired prediction will be updated with our full preview and tips for the next match between these teams.
Full-Time Result Prediction
👉
Moreirense to Win

Our tips, poll and stats for Moreirense v Gil Vicente can all be found here (including the best match odds).

Moreirense won’t want a repeat of their last result here following a 2-1 Primeira Liga loss in their previous game against Vitória Guimarães.

Moreirense have really been misfiring in recent times. Their sum of goals stands at just 4 versus opponents during their previous 6 outings. In those meetings, Moreirense have also seen the number of goals scored against them total 10.

Looking at their past form shows that Moreirense:

In their previous game, Gil Vicente drew 1-1 in the Primeira Liga tie with Arouca.

The numbers tell their own story, and Gil Vicente have been scored against in 6 of their last 6 matches, seeing their opponents hit 8 goals in all. Defensively, Gil Vicente certainly have room for improvement. However, we’ll just have to find out whether such a trend will be sustained here in this match or not.

Going into this encounter, Gil Vicente have not been beaten in their last 3 away league matches.

An examination of their past head to head results stretching back to 25/10/2014 reveals that these fixtures have been miserable for Gil Vicente. They’ve not managed to get any victories whatsoever while Moreirense have just been stronger than them, getting wins in 83% of those matches played.

17 goals were yielded between them in these games, with 14 from Os verdes e brancos and 3 netted by Gilistas. The average goals per game has been 2.83.

The previous league game featuring these clubs was Primeira Liga match day 26 on 11/04/2021 when the final score was Gil Vicente 1-2 Moreirense.

On that occasion, Gil Vicente had 62% possession and 18 shots on goal with 6 of them on target. The goalscorers were Pedro Marques (47') and Ygor Nogueira (72' Own goal).

Moreirense had 10 shots on goal with 4 of them on target. Rafael Martins (19') was the scorer.

The referee was Nuno Almeida.

The Moreirense boss João Henriques has no fitness concerns whatsoever ahead of this match with a completely injury-free group available to choose from.

Due to a completely healthy squad to pick from, the Gil Vicente boss Ricardo Soares doesn’t have any fitness worries whatsoever before this clash.

We envisage that Gil Vicente certainly have the ability to put a goal past this Moreirense lineup, however that probably won’t quite be as many as they will have scored against them.

Our tip is for a 2-1 win for Moreirense at the end of the match. It really should be an interesting one. 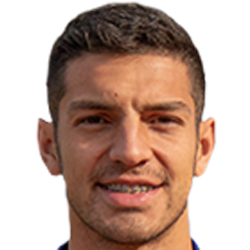 Mostly used in the Striker position, André Luis was born in Santarém, Brazil. Having played his first senior match for Chaves in the 2018 - 2019 season, the goalscoring Forward has accumulated 5 league goals in the Liga Portugal 2021 - 2022 campaign to date coming from a total of 11 appearances.

While we have made these predictions for Moreirense v Gil Vicente for this match preview with the best of intentions, no profits are guaranteed. Always gamble responsibly, and with what you can afford to lose. Good luck with your selections.