Our Girona FC v Real Valladolid tips, poll and stats can be seen in full below including the latest game odds.

Girona FC will be hoping for a better result following a 2-0 La Liga 2 loss in their previous game against Málaga.

Girona FC have really been misfiring in recent times. Their goals record equals just 4 versus opponents during their last six outings. In those games, Girona FC have also seen the number of goals that have gone against them come to 8. We will have to find out if that trend can be sustained into this next match.

Going into this game, the form guide shows that Girona FC:

Following on from being defeated in their last game at the hands of Tenerife in La Liga 2 action, Real Valladolid and their travelling supporters will be hoping that they can get a better result in this one.

During their six most recent matches, José Pacheta's Real Valladolid have turned their attacks into goals 6 times - yielding them a goals scored per game average of 1.

Looking at the statistics for their head to head duels going back to 04/01/2016, neither club has come out on top overall with Girona FC winning 2 of those games, Real Valladolid 2 and 2 being draws in normal time.

8 goals were yielded between them during those clashes, with 4 of them from Blanquivermells and 4 coming from Pucela. That’s an average goals per game figure of 1.33.

The last league game between the two was La Liga match day 34 on 23/04/2019 which finished with the scoreline of Real Valladolid 1-0 Girona FC.

That day, Real Valladolid managed 49% possession and 13 shots at goal with 4 of them on target. Their only player on the scoresheet was Michel Herrero (67').

For their opponents, Girona FC had 6 attempts on goal with 0 on target.

The Girona FC manager Míchel Sánchez Muñoz has a full complement, with no fitness worries whatsoever coming into this game thanks to a fully injury-free squad to pick from.

In our opinion, Real Valladolid and Girona FC could both end up scoring in what appears to be a good match-up, with little separating these two teams.

Let’s see how it plays out, but a draw is looking likely to us. With that in mind, we reckon that it will be a tight encounter with a 1-1 score draw when all is said and done. 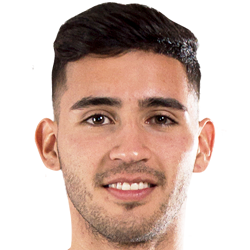 Mostly taking up the Striker position, Nahuel Bustos was born in Córdoba, Argentina. After having played his first senior match for Talleres in the 2016 - 2017 season, the accomplished Forward has scored a sum of 2 league goals in this LaLiga2 2021 - 2022 season to date in 5 appearances.

We have made these Girona FC v Real Valladolid predictions for this match preview with the best intentions, but no profits are guaranteed. Please always gamble responsibly, only with money that you can afford to lose. Good luck if you do place a bet today.