The Premiership match at The Showgrounds on Friday will see hosts Newry City facing opposition in the form of Glentoran.

All Newry City v Glentoran match predictions, user poll and stats are shown below - plus the latest betting odds.

Newry City will be looking to improve on their last outing here after a 3-1 Premiership loss in their previous game against Crusaders.

It has been all too rare in recent times where Newry City have shown defensive steel. In fact, Newry City have failed to prevent opponents from scoring in 5 of their previous 6 clashes, giving up 11 goals in the process.

After being defeated in their last game at the hands of Larne in Premiership action, Glentoran will be aiming to make amends here.

The stats tell the story, and Glentoran have been scored against in 5 of their last 6 games, seeing opposing sides hit 9 goals overall. In defence, Glentoran have been far from perfect. We will just have to see whether or not that trend can be continued on into this next match.

A study of their past head to head meetings going back to 19/01/2019 tells us that these fixtures have not been kind to Newry City. They’ve not been able to get any victories whatsoever while Glentoran have been the better of the two, running out winners in 83 per cent of those matches.

In all, 12 goals were scored between the two sides throughout the course of those matches, with 2 for City and 10 created by The Glens. That is an average goals per game value of 2.

The last league encounter between these sides was Premiership match day 12 on 22/10/2022 which ended up with the score at Newry City 0-1 Glentoran.

The match was refereed by Ross Dunlop.

There is just one fitness concern for the Newry City gaffer Darren Mullen to be concerned with due to a largely intact squad. Philip Donnelly (Unknown Injury) is out of contention.

From a largely available group of players, there is only the lone fitness worry for the Glentoran manager Rodney McAree to be concerned with. Conor McMenamin (Knock) won’t be playing here.

In our view, Glentoran will probably be able to create a high number of chances and successful shots on target.

However, Newry City may well find it hard to score- but, we do see them converting at least once here, too.

We’re therefore expecting to see a pretty comfortable 1-3 win for Glentoran at the end of the 90 minutes. 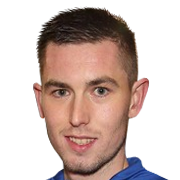 Mostly played in the Striker position, Daniel Hughes was born in Newry, N. Ireland. Having made a first senior appearance for Warrenpoint Town in the 2013 - 2014 season, the skilful Forward has managed 5 league goals in the Premiership 2022 - 2023 season so far in 19 appearances.

We have made these Newry City v Glentoran predictions for this match preview with the best intentions, but no profits are guaranteed. Please always gamble responsibly, only with money that you can afford to lose. Good luck with your selections.