The NK Osijek v Gorica live stream video is ready for 16/09/2021. Supporters of the teams can watch this clash on a live streaming service should the game be featured in the schedule referenced above. Here we show useful info for watching this Prva Liga match that includes the most recent guide to form, head to head meetings and our match tips.

To watch this game using other ways, search for tv listings relating to your local region. Such broadcasting deals are typically distributed on a per-competition/league or even per-game arrangement basis. For games shown live on regional tv programmes, check the schedules on channels such as BT Sport, Amazon Prime Video, Sky Sports, Now TV, iTV, Canal+, Fox Soccer, ESPN depending on where you are.

Where the abovementioned broadcaster is showing NK Osijek v Gorica soccer live streaming service, you can see the game on a mobile (iPhone, Android including Sony Xperia) and computer or even tablet (eg iPad, Huawei MatePad).

After the match finishes, we might also link to the match highlights from time to time. We are not responsible for the transmission of any match video content linked to from this site. All legal issues must be dealt with via the hosters/owners of this content.

Our full set of predictions, statistics and match poll for NK Osijek v Gorica can be seen below including the latest game odds.

NK Osijek go into this match following on from a 1-1 Prva Liga tied result versus Lokomotiva Zagreb.

It has been a rare occasion in recent games where NK Osijek haven’t conceded. The facts show that NK Osijek have been scored against in 5 of their previous 6 clashes, letting in 7 goals along the way.

In their previous fixture, Gorica drew 1-1 in the Prva Liga tie with Hrvatski Dragovoljac.

Throughout their 6 latest matches, Krunoslav Rendulić's Gorica have found the net 6 times - earning them the goals per game average of 1.

Ahead of this clash, Gorica have not beaten NK Osijek when they've played them away from home in the last 5 league games. They really have not been travelling well at all.

Looking at the statistics for their head to head meetings going back to 02/02/2020, it’s been all-even between these two clubs with NK Osijek winning 2 of those games, Gorica 2 and 2 being drawn in normal time.

A combined total of 14 goals were scored between the two sides in this period, with 6 of them from Bijelo-plavi and 8 coming from Gorica. That is an average goals per game value of 2.33.

On that occasion, Gorica had 36% possession and 5 shots at goal with 2 of them on target. Their only player on the scoresheet was Aleksandar Jovičić (48').

On the other side, NK Osijek got 15 attempts on goal with 4 on target.

It doesn’t get much better regarding selection, with just the lone fitness concern for the NK Osijek boss Nenad Bjelica to contend with thanks to an almost full-strength group. Ante Erceg (Ruptured knee ligament) will miss out.

Out of a mainly healthy squad, there is just a single fitness issue for the Gorica boss Krunoslav Rendulić to contend with. Joey Suk (Fractured Leg) misses out for this game.

Gorica are dangerous enough to breach the defence of this NK Osijek team, however that is unlikely to be enough to avoid defeat.

We can see both teams to score in a 2-1 winning score for NK Osijek when the full-time whistle blows. Hopefully this is a good one. 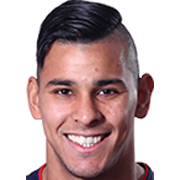 Usually used in the Striker position, Ramón Mierez was born in Resistencia, Argentina. Having made his senior debut playing for Tigre in the 2016 - 2017 season, the accomplished Forward has managed to score 2 league goals in the Prva Liga 2021 - 2022 campaign to date from a total of 8 appearances.

We have made these NK Osijek v Gorica predictions for this match preview with the best intentions, but no profits are guaranteed. Please always gamble responsibly, only with money that you can afford to lose. We wish you the best of luck.

⚽️ Where can I see the predictions for other Prva Liga matches?

Look at all of the upcoming (and previous) Prva Liga predictions & previews here.