All Granada v Valencia game predictions, stats and user poll are shown below - plus the latest match odds.

Granada will want to continue from where they left off last time out with the 0-2 La Liga victory versus Alaves.

In their prior six games, Diego Martínez's Granada have hit the back of the net a combined total of 7 times which gives them an average number of goals per match of 1.17.

Heading into this contest, Granada have not won at home in their last 2 league games.

Following on from being beaten in their last game against Athletic Bilbao in La Liga competition, Valencia will be aiming to make amends here.

Looking at their form, and Valencia have been scored against in 5 of their last 6 games, letting opponents get 9 goals in all. At the back, Los Che can certainly do much better. Such a pattern won’t necessarily follow through into this next game, however.

Going into this contest, Valencia are without a win away from home in their last 8 league matches. It's not a good run at all.

An examination of their most recent head to head meetings dating back to 14/01/2016 shows us that Granada have won 1 of these & Valencia 4, with the tally of drawn matches being 1.

A sum of 17 goals were shared by the two clubs in this period, with 5 for Nazaríes and 12 for Los Che. This gives an average number of goals per game equal to 2.83.

In all likelihood, Nazaríes should use the 4-2-3-1 system for this one, beginning the first half with Aaron Escandell, Carlos Neva, Domingos Duarte, Germán Sánchez, Dimitri Foulquier, Yangel Herrera, Ramon Azeez, Darwin Machis, Fede Vico, Antonio Puertas and Roberto Soldado.

We’re inclined to think that Granada will have to work hard as a team to hit the back of the net against this Valencia lineup who we reckon should get a goal themselves and run out victorious.

With that in mind, we reckon that it will be a good battle with a 0-1 winning score for Valencia when the full-time whistle blows.

Over/Under 2.5 Goals Prediction for Granada vs Valencia
Under 2.5 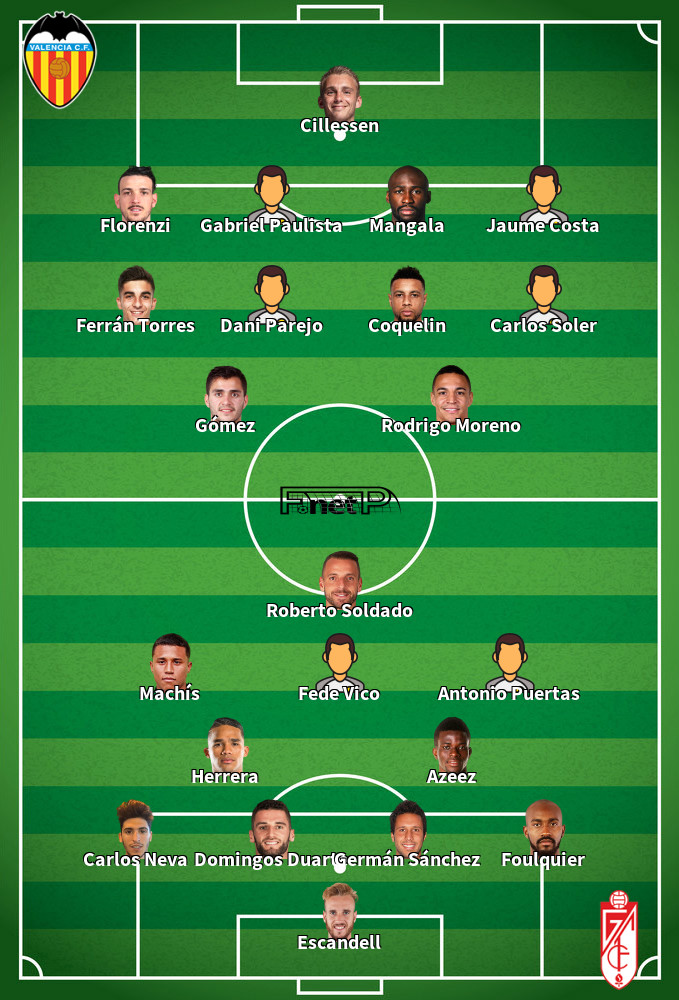 Regularly playing in the Striker position, Carlos Fernández was born in Seville, Spain. Having made a first senior appearance for Sevilla FC in the 2013 - 2014 season, the talented Forward has netted 7 league goals in the LaLiga 2019 - 2020 season to date in 28 appearances.

We have made these Granada v Valencia predictions for this match preview with the best intentions, but no profits are guaranteed. Please always gamble responsibly, only with money that you can afford to lose. Best of luck with your selections.