Toluca head to The Estadio Akron on Sunday for the Liga MX (Clausura) meeting with home side CD Guadalajara.

All of our predictions, stats and the user poll for CD Guadalajara v Toluca are shown below (including the best match odds).

In their last 6 fixtures, Veljko Paunović's CD Guadalajara have celebrated scoring 5 times - an average number of goals per match of 0.83.

Their past results show that CD Guadalajara:

The numbers tell their own story, and Toluca have been scored against in 6 of their last 6 matches, letting opponents get 13 goals in all. At the back, Toluca have not been doing too well. We shall soon see if that trend will end up being continued on into this next match.

Coming into this meeting, Toluca have not emerged victorious against CD Guadalajara when having played them away from home in the previous 13 matches in the league. A truly shameful run of away results.

Checking out their prior head to head duels dating back to 26/01/2020, both clubs have shared the honours with CD Guadalajara winning 1 of those games, Toluca 1 and 4 being draws in regulation time.

A sum of 11 goals were yielded between them throughout the course of those matches, with 6 of them from Chivas and 5 for Los Diablos Rojos. That’s an average goals per game of 1.83.

The previous league meeting featuring these sides was Liga MX (Apertura) match day 12 on 04/09/2022 when the final score was Toluca 0-0 CD Guadalajara.

On that occasion, Toluca managed 66% possession and 11 shots at goal with 3 of them on target.

CD Guadalajara got 11 attempts at goal with 5 of them on target.

The match was refereed by César Ramos.

The CD Guadalajara boss Veljko Paunović will be thankful to have no fitness concerns at all coming into this clash thanks to a completely injury-free squad to pick from.

Thanks to a fully injury-free squad ready to go, the Toluca boss Ignacio Ambriz has no fitness worries to report before this match.

We’re of the view that Toluca will have their work cut out to breach the defence of this CD Guadalajara side who should get a goal themselves and run out victorious.

With that in mind, we reckon that it will be a hard-fought contest, finishing with a 1-0 victory for CD Guadalajara at the end of this game. 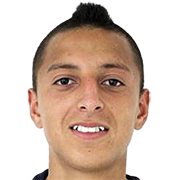 Usually played in the Right Wing position, Roberto Alvarado was born in Irapuato, Mexico. Having played his first senior match for Pachuca in the 2016 - 2017 season, the skilful Forward has bagged 2 league goals in this Liga MX (Apertura) 2022 - 2023 campaign to date coming from a total of 17 appearances.

We have made these CD Guadalajara v Toluca predictions for this match preview with the best intentions, but no profits are guaranteed. Please always gamble responsibly, only with money that you can afford to lose. Good luck with your selections.