Our Hallescher v Wehen Wiesbaden tips, poll and stats can be seen in full below - plus the latest match odds.

Hallescher will be hoping for a repeat of their last result, following a 1-0 3rd Liga success versus Wehen Wiesbaden.

The only scorer from Hallescher was Tom Zimmerschied (11').

It has been all too rare in recent games where Hallescher have managed to hold out for a full 90 minutes. It will be a concern for them that Hallescher have failed to prevent opponents from scoring in 5 of their previous 6 matches, letting in 8 goals along the way. That trend isn’t assured to follow through into this next game, however.

The stats don’t lie, and Wehen Wiesbaden have been scored against in 5 of their last 6 matches, letting opponents get 8 goals in total. At the back, Wehen Wiesbaden certainly have room for improvement.

A glance at their prior head to head clashes going back to 24/02/2018 tells us that Hallescher have won 1 of these games and Wehen Wiesbaden 4, with the number of drawn matches being 1.

A combined total of 20 goals were scored between them in these games, with 8 of them for Hallescher and 12 created by Wiesbaden. That is an average goals per game value of 3.33.

The last league fixture between the two was 3rd Liga match day 19 on 13/12/2021 when it finished Wehen Wiesbaden 2-1 Hallescher.

Here, we’re thinking that Hallescher could well find it tough to breach the defence of this Wehen Wiesbaden lineup who we think should gain the upper hand.

Therefore, we predict a highly competitive game with a 0-1 winning margin for Wehen Wiesbaden at the end of the 90 minutes. 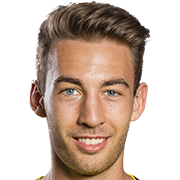 Usually taking up the Striker position, Michael Eberwein was born in Dellnhausen, Germany. After making a first senior appearance for Fortuna Köln in the 2018 - 2019 season, the accomplished Forward has struck 11 league goals in the 3. Liga 2021 - 2022 campaign to date from a total of 32 appearances.

While we have made these predictions for Hallescher v Wehen Wiesbaden for this match preview with the best of intentions, no profits are guaranteed. Always gamble responsibly, and with what you can afford to lose. Good luck if you do place a bet today.