Return to this page a few days before the scheduled game when this expired prediction will be updated with our full preview and tips for the next match between these teams.
Full-Time Result Prediction
👉
Würzburger Kickers to Win

Hallescher will be at flyeralarm Arena on Sunday for the 3rd Liga showdown with home side Würzburger Kickers.

Our Würzburger Kickers v Hallescher tips, poll and stats can be seen in full below - plus the latest match odds.

Würzburger Kickers will be looking for a repeat result of a 2-4 3rd Liga triumph against Meppen.

In their previous fixture, Hallescher drew 1-1 in the 3rd Liga match with Viktoria Cologne.

The only scorer from Hallescher was Marcel Titsch-Rivero (33'). Jeremias Lorch (8') was the scorer for Viktoria Cologne.

André Meyer's Hallescher have fired home 7 times throughout their most recent six matches. The total of goals that they have conceded during those matches comes to 7.

If we look at their past head to head meetings stretching back to 14/04/2018, there has been little between the sides with Würzburger Kickers winning 2 of those games, Hallescher 2 and 2 being draws in normal time.

In all, 19 goals were yielded between them in these games, with 11 for Würzburg and 8 for Hallescher. This gives an average number of goals per game equal to 3.17.

The last league clash featuring these sides was 3rd Liga match day 18 on 04/12/2021 when it finished Hallescher 0-0 Würzburger Kickers.

Our feeling is that Hallescher have the capability to score a goal against this Würzburger Kickers lineup, but it possibly won’t quite be enough to avoid a loss.

We reckon that it will be a tight encounter finishing with a 2-1 advantage for Würzburger Kickers at the end of the match. There looks to be little in this one. 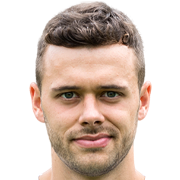 Regularly taking up the Left Attacking Midfielder position, Robert Herrmann was born in Strausberg, Germany. After making a first senior appearance for SV Sandhausen in the 2017 - 2018 season, the dangerous Midfielder has accumulated 4 league goals in this 3. Liga 2021 - 2022 campaign so far in a total of 26 appearances.

We have made these Würzburger Kickers v Hallescher predictions for this match preview with the best intentions, but no profits are guaranteed. Please always gamble responsibly, only with money that you can afford to lose. Good luck with your selections.