Karlsruhe will be hosting visitors Hannover at Wildparkstadion in the Bundesliga 2 match on Saturday.

Our tips, poll and stats for Karlsruhe v Hannover can all be found here (including the best match odds).

Karlsruhe head into this fixture following a 0-0 Bundesliga 2 tied result against Hannover.

Karlsruhe haven’t had any problems with scoring, hitting the target every time they’ve gone out to play in their last 6 games.

They have totted up the amount of 9 during that period while also conceding a total of 11.

Coming into this fixture, Karlsruhe have not won at home in their last 2 league matches.

Jan Zimmermann's Hannover have converted 6 times in the course of their latest six matches. The total of goals that have been scored against them during those matches equals 6.

Their prior results show that Hannover:

If we look at their past head to head duels stretching back to 19/08/2018, it’s been all-even between these two clubs with Karlsruhe winning 2 of those games, Hannover 2 and 2 being draws after 90 minutes of play.

A sum of 19 goals were yielded between them in these games, with 7 of them for Karlsruhe and 12 being from Hannover. That’s an average goals per game figure of 3.17.

The previous league match featuring these sides was Bundesliga 2 match day 18 on 27/01/2021 which finished with the scoreline of Karlsruhe 1-0 Hannover.

The Karlsruhe boss Christian Eichner has a full complement, with no fitness concerns to speak of coming into this match owing to a fully injury-free group to pick from.

Due to a fully healthy squad available for selection, the Hannover manager Jan Zimmermann has zero fitness concerns to speak of coming into this game.

Here, we’re thinking that Hannover might need a bit of good fortune to break down this Karlsruhe outfit who we think will manage to score & go ahead.

With that in mind, we reckon that it will be a very even match with a 1-0 winning score for Karlsruhe when all is said and done. 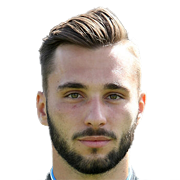 Generally taking up the Left Wing position, Fabian Schleusener was born in Germany. Having made his senior debut playing for Freiburg in the 2015 - 2016 season, the skilful Forward has contributed 3 league goals in this 2. Bundesliga 2021 - 2022 season to date in a total of 14 appearances.

We have made these Karlsruhe v Hannover predictions for this match preview with the best intentions, but no profits are guaranteed. Please always gamble responsibly, only with money that you can afford to lose. Good luck if you do place a bet today.