For all of our match predictions, pre-game poll and statistics for Port Vale v Harrogate Town, scroll down - plus the latest match odds.

Port Vale will be looking for another win after the 1-2 League Two triumph against Swindon Town.

Darrell Clarke's Port Vale have managed to score a sum total of 9 times over their past 6 outings. The corresponding number of goals that have been scored against them in those fixtures amounts to 8.

In their previous fixture, Harrogate Town drew 2-2 in the League Two tie with Newport County.

Over the course of their last 6 clashes, Harrogate Town have helped themselves to a total of 13 goals. Harrogate Town have also managed to score on each one of those occasions. During those fixtures, their defenders have seen 6 goals go against them.

Coming into this contest, Harrogate Town haven't been defeated in their previous 2 away league matches.

The previous league meeting between the two was League Two match day 40 on 05/04/2021 which ended up with the score at Harrogate Town 0-2 Port Vale.

The Port Vale boss Darrell Clarke does not have any fitness worries to speak of ahead of this clash with a completely healthy group available for selection.

Thanks to a completely injury-free group to choose from, the Harrogate Town boss Simon Weaver has no fitness concerns to report before this clash.

Our assessment is that Harrogate Town and Port Vale won’t have much between them here, and goals could be hard to come by.

A scoreless draw looks like a real possibility, but we’ll see what happens. Our tip is therefore for a tight encounter with a 0-0 score when all is said and done. 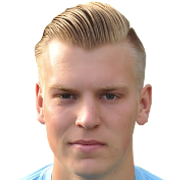 Usually deployed in the Centre Midfield position, Ben Garrity was born in England. Having made his senior debut playing for Port Vale in the 2021 - 2022 season, the goalscoring Midfielder has got 2 league goals in the League Two 2021 - 2022 campaign so far in 6 appearances.

While we have made these predictions for Port Vale v Harrogate Town for this match preview with the best of intentions, no profits are guaranteed. Always gamble responsibly, and with what you can afford to lose. Good luck!