The Veikkausliiga match at Bolt Arena on Sunday will see home side HJK prepare for the visit of Ilves.

Our predictions, user poll and statistics for HJK v Ilves can be found here - as well as the best betting odds.

HJK will be hoping for a repeat of their last result, following a 0-1 Veikkausliiga victory vs FC Inter Turku.

In that game, HJK had 48% possession and 11 attempts at goal with 5 of them on target. The only player to score for HJK was Bojan Radulović (42'). FC Inter Turku had 7 attempts on goal with 1 on target.

An interesting theme in recent HJK games is the number of nil scores.

From their prior 6 matches leading up to this one, in 5 of them a bet on both teams scoring would have lost.

Ilves head into the clash following a 3-1 Veikkausliiga win as they beat SJK in their previous fixture.

Ilves have attacked well leading up to this encounter, scoring 13 times in their last 6 matches. Having said that, Ilves can also improve defensively after being scored against in 5 of those same games. In any event, it remains to be seen if that trend shall be maintained in this game.

Ahead of this meeting, Ilves have not won away from home in their last 2 league games.

A glance at their prior head to head clashes stretching back to 19/10/2019 tells us that HJK have won 5 of these & Ilves 1, with the number of drawn games standing at 0.

An aggregate of 19 goals were scored between the two sides throughout the course of those matches, with 13 of them from Klubi and 6 being from Ipa. That is an average goals per game value of 3.17.

The previous league meeting between these sides was Veikkausliiga match day 2 on 16/10/2021 when it finished Ilves 2-3 HJK.

In that game, Ilves managed 37% possession and 8 attempts on goal with 2 of them on target. Their only player to score was Tuomas Ollila (83').

The HJK manager Toni Koskela has no fitness concerns at all coming into this clash owing to a completely injury-free squad available to choose from.

Thanks to a fully injury-free group ready to go, the Ilves manager Toni Kallio has zero fitness concerns whatsoever ahead of this match.

We’re of the view that HJK will most probably dominate possession and create several successful chances.

However, Ilves may well find it hard getting on the scoresheet although we do reckon that they could well end up converting at least once here, too.

We reckon that it will be a decent 3-1 winning margin for HJK at full-time. 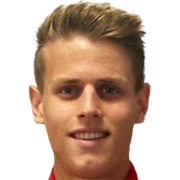 Generally taking up the Striker position, Bojan Radulović was born in Lleida, Spain. Having made his senior debut playing for AIK in the 2020 season, the accomplished Forward has accumulated 2 league goals in the Veikkausliiga 2022 season to date coming from a total of 5 appearances.

We have made these HJK v Ilves predictions for this match preview with the best intentions, but no profits are guaranteed. Please always gamble responsibly, only with money that you can afford to lose.