Sporting Gijón will host visiting side Ibiza at Estadio El Molinón-Enrique Castro in the La Liga 2 game on Friday.

View all of the Sporting Gijón v Ibiza predictions, poll and stats below (plus the best game odds).

Sporting Gijón will be hoping for a better result following a 1-0 La Liga 2 loss in their previous game against Real Zaragoza.

Ibiza come into this match following on from a 0-1 La Liga 2 win versus Real Oviedo in their previous outing.

It has become apparent that Ibiza have struggled for goals over their previous six encounters, contributing the unsatisfactory return of only 4. In those matches, Ibiza have also seen the overall goal aggregate of their opponents equal 8. Historical results aside, we’ll just have to find out if the trend will be maintained here in this game.

On that occasion, Sporting Gijón had 35% possession and 14 shots at goal with 1 on target.

For their opponents, Ibiza had 11 shots at goal with 4 of them on target. Ekain Zenitagoia (15') was the scorer.

Looking at personnel, there is just the sole fitness concern for the Sporting Gijón manager Abelardo Fernández to be concerned about due to a largely intact squad. Jony (Muscle Injury) won’t play.

Owing to a fully healthy group to choose from, the Ibiza boss Javier Baraja does not have any fitness concerns at all ahead of this match.

We’re inclined to think that Sporting Gijón will most probably stay in control for long periods of time and should be able to convert a few of the chances that they create.

At the same time, Ibiza could well struggle to score a goal of their own but we do think it’s quite likely that they will be converting at least once here, too.

We reckon that it will be a fairly comfortable 3-1 win for Sporting Gijón by the time that the referee blows the final whistle. 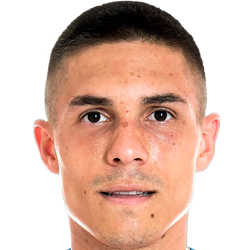 Regularly played in the Striker position, Uroš Đurđević was born in Belgrade, Serbia. After having played his first senior match for Rad in the 2011 - 2012 season, the goalscoring Forward has contributed 2 league goals in the LaLiga2 2022 - 2023 season to date in 6 appearances.

While we have made these predictions for Sporting Gijón v Ibiza for this match preview with the best of intentions, no profits are guaranteed. Always gamble responsibly, and with what you can afford to lose. We wish you the best of luck.