Coming into this meeting, Yeni Malatyaspor haven't been defeated in their previous 6 away league matches.

⚽️ What was the result last time they met in this league?

Heading into this fixture, İstanbul Başakşehir haven't been defeated in their previous 8 home league matches. It's been impressive. 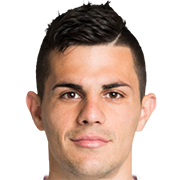 Customarily played in the Central Attacking Midfielder position, Danijel Aleksić was born in Serbia. Having made his senior debut playing for Genoa in the 2009 - 2010 season, the gifted Midfielder has scored a sum of 4 league goals in this Süper Lig 2019 - 2020 season so far from a total of 9 appearances.

While we have made these predictions for İstanbul Başakşehir v Yeni Malatyaspor for this match preview with the best of intentions, no profits are guaranteed. Always gamble responsibly, and with what you can afford to lose. Best of luck.

⚽️ Where can I find the tips for other Süper Lig games?

Look at all of our next (and previous) Süper Lig predictions & previews here.