Our tips, poll and stats for Jagiellonia Białystok v Legia Warsaw can all be found here - as well as the best betting odds.

Jagiellonia Białystok prepare for this game coming off the back of a 0-0 Ekstraklasa drawn game vs Wisła Kraków.

Their prior results show that Jagiellonia Białystok:

Legia Warsaw will go into this meeting following a 5-3 Ekstraklasa win in the defeat of Górnik Zabrze in their previous match.

Legia Warsaw have been good when going forward in the lead-up to this encounter, having scored 10 goals in their previous 6 matches. Having said that, Legia Warsaw have been somewhat leaky at the back, having also been scored against in 6 of those same matches. We will have to find out if that trend will end up being sustained into this next match.

Analysis of their past results shows that Legia Warsaw:

A glance at their most recent head to head meetings stretching back to 13/09/2019 shows that Jagiellonia Białystok have won 1 of them and Legia Warsaw 2, with the tally of drawn games being 3.

A total of 10 goals were produced between them during those clashes, with 3 from Jagiellonia and 7 netted by Wojskowi. That is an average goals per game value of 1.67.

The previous league meeting between these clubs was Ekstraklasa match day 16 on 28/11/2021 and the score finished Legia Warsaw 1-0 Jagiellonia Białystok.

That time, Legia Warsaw managed 60% possession and 16 shots on goal with 5 on target. The scorer was Mattias Johansson (45').

On the other side, Jagiellonia Białystok got 8 shots on goal with 4 on target.

The referee was Tomasz Musiał.

The Jagiellonia Białystok manager Piotr Nowak does not have any fitness worries whatsoever ahead of this match owing to a completely injury-free squad available to choose from.

Due to a completely healthy group to choose from, the Legia Warsaw manager Aleksandar Vuković has no fitness worries at all coming into this clash.

We’re thinking that Jagiellonia Białystok might need a bit of good fortune to put one past this Legia Warsaw team who should do enough to score at the other end and edge ahead.

Therefore, we predict a highly competitive game with a 0-1 advantage for Legia Warsaw at the end of this one. 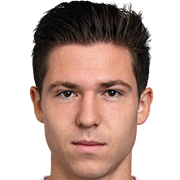 Customarily played in the Left Attacking Midfielder position, Tomáš Přikryl was born in Czech Republic. Having made a first senior appearance for Sigma Olomouc in the 2010 - 2011 season, the goalscoring Midfielder has managed 6 league goals in this Ekstraklasa 2021 - 2022 campaign to date in 26 appearances.

While we have made these predictions for Jagiellonia Białystok v Legia Warsaw for this match preview with the best of intentions, no profits are guaranteed. Always gamble responsibly, and with what you can afford to lose. Good luck!