Regensburg will do battle with away team Nuremberg at Jahnstadion Regensburg in this Bundesliga 2 tie on Saturday.

All Regensburg v Nuremberg game predictions, stats and user poll are shown below (plus the best game odds).

Regensburg head into this game following on from a 2-2 DFB-Pokal drawn result versus Cologne.

Mersad Selimbegović's Regensburg have hit the back of the net a sum total of 8 times over their preceding 6 outings. Conversely, the tally of goals that they have conceded in those same games is 7.

Ahead of this clash, Regensburg haven't beaten Nuremberg in their previous 2 league games.

Nuremberg will go into this clash following on from a 0-2 DFB-Pokal win as they beat Kaan-Marienborn in their most recent fixture.

For Nuremberg, the goals were scored by Johannes Geis (45') and Enrico Valentini (84').

Robert Klauß's Nuremberg have converted 8 times throughout their most recent 6 matches. The number of goals that have been scored against them during that period comes to 9.

Looking at their past form shows that Nuremberg:

Looking at the statistics for their head to head duels stretching back to 27/10/2019, both clubs have shared the honours with Regensburg winning 1 of those games, Nuremberg 1 and 4 being draws after 90 minutes of play.

In all, 15 goals were produced between them during those clashes, with 7 for Regensburg and 8 netted by Nürnberg. That’s an average goals per game figure of 2.5.

The last league contest featuring the two was Bundesliga 2 match day 23 on 19/02/2022 when it finished Nuremberg 2-0 Regensburg.

On that occasion, Nuremberg managed 44% possession and 19 shots at goal with 8 on target. The goalscorers were Pascal Köpke (35') and Taylan Duman (55').

On the other side, Regensburg got 18 attempts at goal with 3 on target.

Our thinking is that Nuremberg and Regensburg won’t have much between them here, and goals could be hard to come by.

We’ll see, but this could easily end up all-square. Our tip is therefore for a tight encounter, finishing with a 0-0 score at the end of this game. 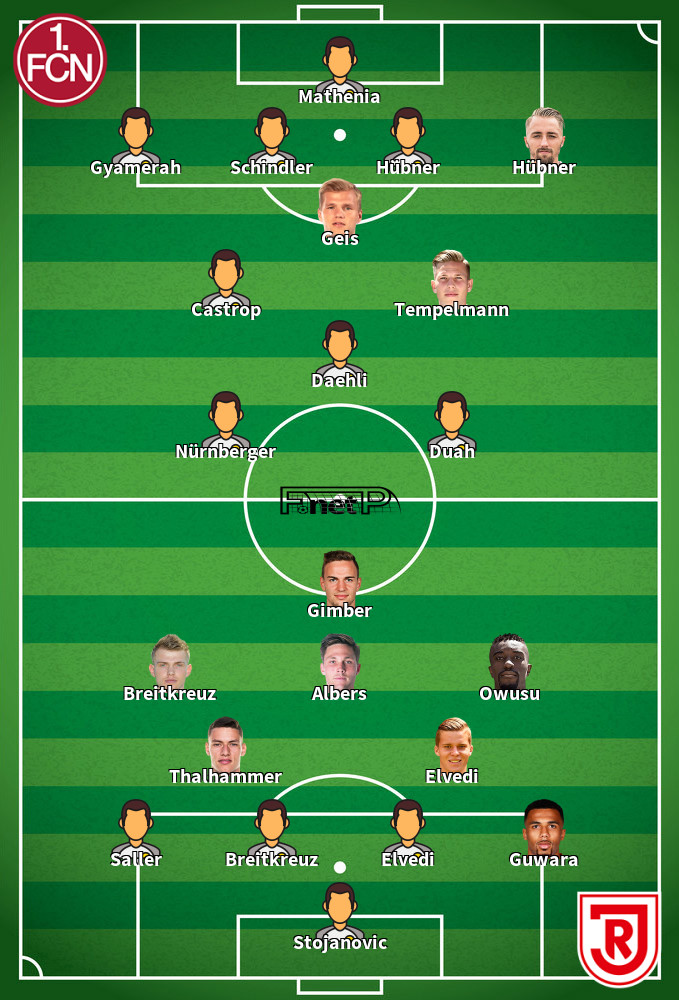 We have made these Regensburg v Nuremberg predictions for this match preview with the best intentions, but no profits are guaranteed. Please always gamble responsibly, only with money that you can afford to lose. Good luck if you do place a bet today.