Full predictions, pre-match stats and user poll for MVV v Jong PSV are shown on this page - plus the latest match odds.

MVV will be looking for a repeat result of a 0-2 Eerste Divisie success versus Almere City.

An interesting feature of more recent MVV games is seeing a zero in the scoreline.

From their prior six clashes leading up to this one, in 5 of them a bet on "Both Teams to Score" would have lost. Let’s find out whether or not that trend will be continued on here.

In their last game, Jong PSV drew 0-0 in the Eerste Divisie match with NAC Breda.

In that match, Jong PSV had 54% possession and 9 attempts on goal with 2 on target. NAC Breda had 5 shots at goal with 1 on target.

Indicating their involvement in productive matches, the back of the net has been hit 21 times in the prior six games in which Jong PSV have played, yielding a mean average of 3.5 goals each meeting. Opposition teams have hit 10 of this grand total.

Going into this encounter, Jong PSV have not registered a win against MVV when having played them away from home in the previous 5 league matches. They'll be keen to stop this run.

The MVV boss Klaas Wels will be grateful to have no fitness concerns at all coming into this match with a fully healthy group to choose from.

With a completely injury-free group to pick from, the Jong PSV boss Ruud van Nistelrooy has zero fitness concerns whatsoever coming into this match.

We’re inclined to think that Jong PSV and MVV could both well score more than once here although it’s hard to see a clear-cut winner.

There shouldn’t be much in it, and a high-scoring draw looks to be quite a realistic result. Therefore, we predict a highly competitive game with a 2-2 score draw at the end of the 90 minutes. 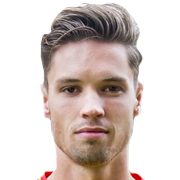 Customarily used in the Central Attacking Midfielder position, Orhan Džepar was born in Eefde, Netherlands. After having played his first senior match for Go Ahead Eagles in the 2015 - 2016 season, the gifted Midfielder has managed to score 4 league goals in the Eerste Divisie 2021 - 2022 season so far from a total of 10 appearances.

We have made these MVV v Jong PSV predictions for this match preview with the best intentions, but no profits are guaranteed. Please always gamble responsibly, only with money that you can afford to lose. Good luck with your selections.