All KV Mechelen v KAA Gent game predictions, stats and user poll are shown below (plus the best game odds).

KV Mechelen will be wanting a better result here following a 1-0 First Division A - Play-Offs losing effort in their last game against KAA Gent.

In that match, KV Mechelen managed 55% possession and 13 attempts on goal with 7 on target. On the other side, KAA Gent got 9 shots on goal with 4 of them on target. Joseph Okumu (82') was the scorer for KAA Gent.

It has been seldom in recent games where KV Mechelen have kept a clean sheet. In fact, KV Mechelen have seen their defence breached in 5 of their previous 6 matches, letting in 11 goals on the way. Historical results aside, we’ll just have to find out if such a trend shall be replicated here in this match or not.

Inspecting their prior head to head clashes going back to 30/08/2020 shows us that KV Mechelen have won 1 of these & KAA Gent 3, with the number of drawn results standing at 2.

A combined sum of 19 goals were produced between them in this period, with 8 of them from Mechelen and 11 netted by De Buffalo's . The average number of goals per game works out to 3.17.

The previous league clash between these sides was First Division A - Play-Offs match day 3 on 07/05/2022 when the final score was KAA Gent 1-0 KV Mechelen.

That day, KAA Gent had 45% possession and 9 attempts at goal with 4 of them on target. The scorer was Joseph Okumu (82').

At the other end, KV Mechelen had 13 shots on goal with 7 on target.

Thanks to a fully injury-free squad ready to go, the KAA Gent boss Hein Vanhaezebrouck has zero fitness worries whatsoever coming into this clash.

We’re of the opinion that KV Mechelen may well find it hard to find the net against this KAA Gent side who should manage to score & go ahead.

We’re therefore expecting a very even match with a 0-1 win for KAA Gent at the end of the match. 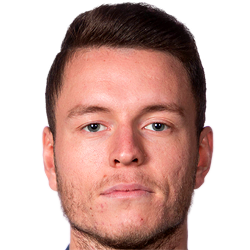 Regularly playing in the Right Wing position, Kerim Mrabti was born in Nacka, Sweden. After having played his first senior match for IK Sirius in the 2014 season, the dangerous Forward has scored a sum of 10 league goals in this First Division A 2021 - 2022 campaign so far from a total of 30 appearances.

While we have made these predictions for KV Mechelen v KAA Gent for this match preview with the best of intentions, no profits are guaranteed. Always gamble responsibly, and with what you can afford to lose. Good luck with your selections.