Return to this page a few days before the scheduled game when this expired prediction will be updated with our full preview and tips for the next match between these teams.
Kaposvári Rákóczi FC will take to the pitch with away side Kisvárda at Rákóczi Stadion in this Nemzeti Bajnokság I fixture on Sunday. Our predictions, user poll and statistics for Kaposvári Rákóczi FC v Kisvárda can be found here - along with the latest match odds.

It has been all too rare in recent times where Kaposvári Rákóczi FC haven’t conceded. In fact, Kraci have seen their defence breached in 5 of their previous 6 games, shipping 17 goals on the way. That kind of pattern might not be carried forward into this match, however.

Going into this encounter, Kisvárda have not won away from home in their last 2 league games.

The last league clash between the two was Nemzeti Bajnokság I match day 20 on 08/02/2020 when it finished Kisvárda 5-3 Kaposvári Rákóczi FC. The referee was Bence Csonka.

Kaposvári Rákóczi FC boss Róbert Waltner will be grateful to have no fitness worries at all ahead of this game thanks to a fully healthy squad ready to go.

Thanks to a fully injury-free squad available for selection, Kisvárda boss Tamás Bódog doesn’t have any fitness concerns to speak of before this match.

In our view, Kaposvári Rákóczi FC have it within them to put one past this Kisvárda side, although one goal probably shouldn’t be as many as they will have scored against them. We therefore reckon that it will be a narrow 1-2 win for Kisvárda at the end of the match. It should be a decent one. 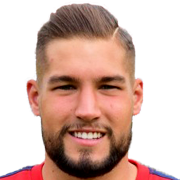 Regularly playing in the Central Attacking Midfielder position, Richárd Nagy was born in Budapest, Hungary. After making a first senior appearance for Kaposvári Rákóczi FC in the 2019 - 2020 season, the skilful Midfielder has managed to score 3 league goals in the Nemzeti Bajnokság I 2019 - 2020 campaign so far in a total of 26 appearances.

We have made these Kaposvári Rákóczi FC v Kisvárda predictions for this match preview with the best intentions, but no profits are guaranteed. Please always gamble responsibly, only with money that you can afford to lose. We wish you the best of luck.