Return to this page a few days before the scheduled game when this expired prediction will be updated with our full preview and tips for the next match between these teams.
Kaposvári Rákóczi FC make the trip to Pancho Aréna on Wednesday for the Nemzeti Bajnokság I clash with home team Puskás Akadémia. View all of the Puskás Akadémia v Kaposvári Rákóczi FC predictions, poll and stats below - plus the latest betting odds.

Puskás Akadémia will be looking to improve on their last outing here following a 2-0 Nemzeti Bajnokság I loss in their previous game against Zalaegerszegi TE. Gergely Bobál (47') and Dávid Bobál (86') scored for Zalaegerszegi TE.

It has been seldom in recent games that Puskás Akadémia have managed to hold out for a full 90 minutes. In fact, Puskás have failed to prevent opponents from scoring in 5 of their previous 6 games, leaking 10 goals during that time.

Coming into this meeting, Puskás Akadémia are without a home win in the past 2 league games.

The trend of at least one team drawing a blank in games featuring Kaposvári Rákóczi FC has become fairly consistent recently. Examining their last six meetings reveals that it’s happened 5 times. During those clashes, opposing sides have hit a goal tally of 20 while Kraci have scored 1. That trend isn’t assured to be continued into this next game, of course.

Going into this contest, Kaposvári Rákóczi FC have not won away from home in their last 10 league games. It's not a good run at all.

The last league clash between these clubs was Nemzeti Bajnokság I match day 17 on 25/01/2020 when it ended Kaposvári Rákóczi FC 1-1 Puskás Akadémia. The referee was József Erdős.

Puskás Akadémia manager Zsolt Hornyák has a full complement, with no fitness concerns whatsoever ahead of this clash with a completely injury-free squad available for selection.

Owing to a fully healthy squad available to select from, Kaposvári Rákóczi FC boss Róbert Waltner has zero fitness worries to speak of ahead of this game.

In this game, Kaposvári Rákóczi FC will be up against it to find the back of the net against a Puskás Akadémia lineup who certainly have the ability to dominate proceedings. We can see a comprehensive 3-0 victory for Puskás Akadémia at the end of this one. 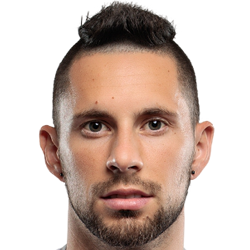 Regularly playing in the Left Wing position, Ádám Gyurcsó was born in Hungary. After having made a senior debut playing for Videoton FC in the 2010 - 2011 season, the talented Forward has accumulated 7 league goals in this Nemzeti Bajnokság I 2019 - 2020 campaign so far coming from a total of 23 appearances.

While we have made these predictions for Puskás Akadémia v Kaposvári Rákóczi FC for this match preview with the best of intentions, no profits are guaranteed. Always gamble responsibly, and with what you can afford to lose.