Kasimpasa will be facing visiting club Konyaspor at Recep Tayyip Erdoğan Stadyumu in this Super Lig match on Monday.

All Kasimpasa v Konyaspor match predictions, user poll and stats are shown below including the latest game odds.

Kasimpasa will be hoping to bounce back here following the 2-0 Super Lig loss in their previous game against Alanyaspor.

Fewer than three goals per match were recorded in 5 of the last 6 meetings where Kasimpasa have taken part. In terms of the goal weighting in this period, opposition teams scored a total of 8 and Kasimpasa got themselves 5.

Their past results show that Kasimpasa:

In their last game, Konyaspor drew 2-2 in the Super Lig tie with Trabzonspor.

In that game, Konyaspor managed 61% possession and 31 attempts on goal with 10 on target. For Konyaspor, goals were scored by Endri Çekiçi (20', 46') and Amir Hadžiahmetović (76' Own goal). At the other end, Trabzonspor got 14 shots at goal with 5 on target. Andreas Cornelius (1') scored for Trabzonspor.

Throughout their 6 previous matches, İlhan Palut's Konyaspor have found the back of the net a total of 9 times - earning them the goals scored per game average of 1.5.

Looking at the pre-match facts, Konyaspor:

A glance at their most recent head-to-head meetings going back to 15/12/2018 tells us that Kasimpasa have won 0 of these and Konyaspor 3, with the number of drawn results standing at 3.

A total of 17 goals were shared by the two clubs in these games, with 6 of them from Apaçiler and 11 being from Konyaspor. That is an average goals per game value of 2.83.

The last league match featuring the two was Super Lig match day 30 on 15/03/2021 which finished with the scoreline of Kasimpasa 1-1 Konyaspor.

That time, Kasimpasa had 58% possession and 12 shots on goal with 4 of them on target. Their only player on the scoresheet was Haris Hajradinović (96').

Konyaspor got 7 attempts on goal with 2 on target. Artem Kravets (92') was the scorer.

The referee was Volkan Bayarslan.

In an otherwise healthy group, there’s only a single fitness problem for the Konyaspor manager İlhan Palut to be concerned about. Artem Kravets (Unknown Injury) won’t be in action.

We’re of the view that Konyaspor and Kasimpasa should both get enough opportunities to score, although it’s hard to separate the two.

A draw looks like a realistic possibility, but we’ll see what happens. We’re therefore anticipating a very close game with a 1-1 score when all is said and done. 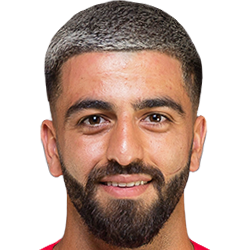 Mostly taking to the field in the Striker position, Umut Bozok was born in France. After making a first senior appearance for Nîmes in the 2017 - 2018 season, the talented Forward has managed 2 league goals in the Süper Lig 2021 - 2022 campaign so far from a total of 5 appearances.

While we have made these predictions for Kasimpasa v Konyaspor for this match preview with the best of intentions, no profits are guaranteed. Always gamble responsibly, and with what you can afford to lose. Best of luck with your selections.