For all of our match predictions, pre-game poll and statistics for Wehen Wiesbaden v KFC Uerdingen, scroll down (including the best match odds).

Wehen Wiesbaden will be looking for another win after the 0-1 3rd Liga triumph vs Mannheim.

The only name on the scoresheet from Wehen Wiesbaden was Gustaf Nilsson (89').

Wehen Wiesbaden have been on a persistent run of goalscoring form, netting every time they’ve gone out to play in their last 6 games.

They’ve claimed a sum of 10 during that time while also conceding a total of 6.

Their past results show that Wehen Wiesbaden:

KFC Uerdingen come into this clash after a 0-1 3rd Liga win to beat Bayern Munich II in their previous outing.

The only player to score from KFC Uerdingen was Mike Feigenspan (23').

A succession of effective displays by the KFC Uerdingen defensive unit has seen the number of goals they’ve conceded amounting to 4 from their past 6 outings combined. During the same period of time, their own forwards have managed to score 6. We shall soon find out whether or not that trend will be sustained here.

The previous league game between these sides was 3rd Liga match day 6 on 20/10/2020 which ended up with the score at KFC Uerdingen 0-4 Wehen Wiesbaden.

Uerdingen boss Stefan Krämer has a number of players out of action. Jan Kirchhoff (Torn muscle bundle), Edvinas Girdvainis (Medial Collateral Ligament Tear) and Osayamen Osawe (Syndesmotic ligament tear) are not ready for selection. Edvinas Girdvainis is ineligible for this match because of suspension.

Our feeling is that KFC Uerdingen have enough to find the net against this Wehen Wiesbaden lineup, but that might not quite be as many as they will have scored against them.

We reckon that it will be a 2-1 winning margin for Wehen Wiesbaden at the end of the match. Expecting it to be very competitive. 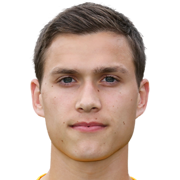 Mostly playing in the Left Attacking Midfielder position, Gianluca Korte was born in Speyer, Germany. After having played his first senior match for Eintracht Braunschweig in the 2011 - 2012 season, the dangerous Midfielder has netted 4 league goals in this 3. Liga 2020 - 2021 season so far in a total of 18 appearances.

While we have made these predictions for Wehen Wiesbaden v KFC Uerdingen for this match preview with the best of intentions, no profits are guaranteed. Always gamble responsibly, and with what you can afford to lose.