Return to this page a few days before the scheduled game when this expired prediction will be updated with our full preview and tips for the next match between these teams.
Full-Time Result Prediction for Kilmarnock vs Aberdeen
Draw
Kilmarnock will play Aberdeen in Wednesday’s upcoming Scottish Cup fixture.

We’ve got the feeling that Aberdeen and Kilmarnock could well both score and end up finding themselves in a fairly even game here. Let’s see what happens, but it could well be that we end up with scores level. We’re therefore seeing a very close game with a 1-1 scoreline at full-time. Our Kilmarnock v Aberdeen tips, poll and stats can be seen in full below - plus the latest betting odds. 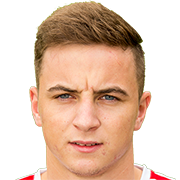 Generally used in the Striker position, Eamonn Brophy was born in Cleland, Scotland. After having played his first senior match for Hamilton Academical in the 2012 - 2013 season, the goalscoring Forward has struck 7 league goals in the Premiership 2019 - 2020 season to date coming from a total of 24 appearances.

While we have made these predictions for Kilmarnock v Aberdeen for this match preview with the best of intentions, no profits are guaranteed. Always gamble responsibly, and with what you can afford to lose. We wish you the best of luck.