Return to this page a few days before the scheduled game when this expired prediction will be updated with our full preview and tips for the next match between these teams.
Full-Time Result Prediction
👉
Kisvárda to Win

Kisvárda won’t want a repeat of their last result here after a 2-1 Nemzeti Bajnokság I loss in their previous game against Budapest Honvéd FC.

Kisvárda haven’t been able to stop scoring goals, netting in each and every one of their last 6 matches.

They have totted up the amount of 9 during that period while seeing the number of goals scored against them stand at 6. We will have to see if that trend will end up being sustained into this next match.

Going into this game, the form guide shows that Kisvárda:

Since a loss in their previous game against Gyírmót in Nemzeti Bajnokság I competition, Újpest FC and their travelling supporters will be hoping that they can get a better result in this one.

Illustrating their bias toward eventful matches, we’ve seen goals 20 times in the previous 6 games in which Újpest FC have played, making it an average of 3.33 goals per fixture. Opposition teams have hit 13 of these goals.

Checking on their past head to head clashes going back to 24/08/2019 tells us that Kisvárda have won 3 of these and Újpest FC 2, with the number of drawn matches being 1.

A sum of 15 goals were scored between the two sides in these games, with 8 for Kisvárda and 7 for Lilák. That’s an average goals per game of 2.5.

The last league game between the two was Nemzeti Bajnokság I match day 26 on 13/03/2021 which finished with the scoreline of Újpest FC 3-0 Kisvárda.

The referee was József Erdős.

The Kisvárda boss João Janeiro has a full complement, with no fitness worries whatsoever before this game thanks to a completely injury-free squad available for selection.

Thanks to a completely injury-free squad ready to go, the Újpest FC manager Michael Oenning does not have any fitness concerns to speak of ahead of this game.

In our opinion, Újpest FC would be disappointed if they were not to score a goal against this Kisvárda team, but that is unlikely to prevent them from conceding a couple at the other end.

We’re going for a narrow 2-1 winning score for Kisvárda at the end of the 90 minutes. Could easily see this go either way. 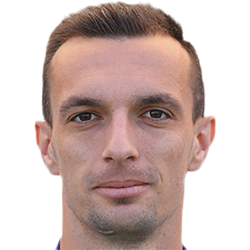 Mostly used in the Striker position, Jasmin Mešanović was born in Tuzla, Bosnia and Herzegovina. After having made a senior debut playing for NK Osijek in the 2014 - 2015 season, the gifted Forward has bagged 4 league goals in the Nemzeti Bajnokság I 2021 - 2022 season to date in 8 appearances.

We have made these Kisvárda v Újpest FC predictions for this match preview with the best intentions, but no profits are guaranteed. Please always gamble responsibly, only with money that you can afford to lose.