KV Kortrijk will be at Diaz Arena on Saturday for the First Division A fixture with home side Oostende.

Our predictions, user poll and statistics for Oostende v KV Kortrijk can be found here - plus the latest betting odds.

Oostende prepare for this game after a 1-1 First Division A stalemate versus Eupen.

The only name on the scoresheet from Oostende was Marko Kvasina (79'). Smail Prevljak (49') scored for Eupen.

Oostende have been on a persistent run of goalscoring form, netting every time they’ve gone out to play in their last 6 games.

They have claimed a sum of 10 during that time while seeing the number of goals scored against them stand at 7.

Ahead of this clash, Oostende haven't won against KV Kortrijk in their previous 4 league games.

KV Kortrijk will go into the clash following a 2-1 First Division A win to defeat KRC Genk in their most recent game.

In the course of their six most recent matches, Yves Vanderhaeghe's KV Kortrijk have managed to stick the ball in the net 5 times therefore earning them the goals scored per game average of 0.83.

Their prior results show that KV Kortrijk:

Inspecting their past head-to-head clashes dating back to 20/01/2018 shows that Oostende have won 2 of these games and KV Kortrijk 3, with the number of draws standing at 1.

A combined sum of 20 goals were yielded between them in these games, with 8 of them from De Kustboys and 12 created by De Kerels. That’s an average goals per game figure of 3.33.

The previous league contest featuring these clubs was First Division A match day 14 on 29/11/2020 which finished with the scoreline of KV Kortrijk 3-1 Oostende.

Oostende manager Alexander Blessin doesn’t have any fitness concerns to speak of coming into this clash owing to a fully injury-free group to pick from.

Due to a mostly available group, there is just the sole fitness issue for the KV Kortrijk boss Yves Vanderhaeghe to be concerned about. Kristof D'Haene (Hip Injury) won’t be playing here.

We feel that KV Kortrijk have the firepower to find the net against this Oostende outfit, but that probably shouldn’t be as many as the goals that they could concede.

We are anticipating a narrow 2-1 advantage for Oostende when the full-time whistle blows. It should be a decent one. 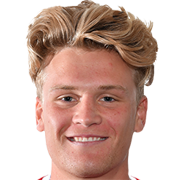 Mostly taking up the Centre Midfield position, Cameron McGeehan was born in Kingston-upon-Thames, England. Having made his senior debut playing for Luton Town in the 2013 - 2014 season, the talented Midfielder has hit 3 league goals in the First Division A 2020 - 2021 campaign so far coming from a total of 16 appearances.

We have made these Oostende v KV Kortrijk predictions for this match preview with the best intentions, but no profits are guaranteed. Please always gamble responsibly, only with money that you can afford to lose. Best of luck.