KV Kortrijk are the guests at King Power at Den Dreef Stadion on Sunday for the First Division A meeting with home side Oud-Heverlee Leuven.

To see all of our predictions, user poll & stats for Oud-Heverlee Leuven v KV Kortrijk, scroll down (including the best match odds).

Oud-Heverlee Leuven enter this fixture following on from a 2-2 First Division A draw against Antwerp.

In their last fixture, KV Kortrijk drew 2-2 in the First Division A match with KV Mechelen.

In that game, KV Kortrijk had 45% possession and 8 attempts on goal with 5 on target. For KV Kortrijk, the goalscorers were Kristof D'Haene (58') and Pape Habib Guèye (76'). At the other end, KV Mechelen got 13 attempts at goal with 4 of them on target. Nikola Storm (14', 20') scored for KV Mechelen.

Luka Elsner's KV Kortrijk have found the back of the net a total of 8 times in the course of their previous sextet of matches. The aggregate of goals that they have conceded during that period comes to 6.

Ahead of this clash, KV Kortrijk have left without a victory over Oud-Heverlee Leuven when they have played them away from home in the previous 4 league games. Not good.

Checking on their most recent head-to-head meetings stretching back to 12/09/2015 shows us that Oud-Heverlee Leuven have won 3 of these & KV Kortrijk 2, with the number of drawn games being 1.

A combined total of 13 goals were shared by the two clubs in these games, with 8 from OHL and 5 coming from De Kerels. The average goals per game has been 2.17.

The previous league meeting featuring the two was First Division A match day 26 on 12/02/2021 which ended up with the score at Oud-Heverlee Leuven 3-1 KV Kortrijk.

The match was refereed by Wesley Alen.

The Oud-Heverlee Leuven manager Marc Brys does not have any fitness concerns whatsoever coming into this game owing to a completely healthy group available for selection. Sébastien Dewaest is ineligible for this match because of suspension.

Our thinking is that KV Kortrijk and Oud-Heverlee Leuven should both be able to find the back of the net at least once here although it’s difficult at this stage to select a clear winner.

Looks like a high-scoring draw might be possible, as we’re expecting it to be that close. With that in mind, we reckon that it will be a high-scoring affair with a 2-2 draw when the full-time whistle blows. 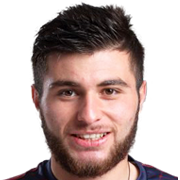 Normally deployed in the Right Wing position, Levan Shengelia was born in Samtredia, Georgia. After making a first senior appearance for Konyaspor in the 2019 - 2020 season, the skilful Forward has bagged 2 league goals in this First Division A 2021 - 2022 campaign to date coming from a total of 2 appearances.

While we have made these predictions for Oud-Heverlee Leuven v KV Kortrijk for this match preview with the best of intentions, no profits are guaranteed. Always gamble responsibly, and with what you can afford to lose.