The Lamia v PAS Giannina live stream video is set to be broadcast on 24/02/2021. Football fans can watch this match on a live streaming service if this match is included in the schedule referenced above. Here we provide you with useful info for watching this Super League game including the most recent guide to form, h2h meetings and our game views.

In order to watch the match via alternative sources, check TV channel listings for your place of residence. Such broadcasting deals are often allocated on a per-competition/league or even single fixture level. For matches shown live on regional television programmes, check the schedules on the likes of BT Sport, Amazon Prime Video, Sky Sports, Now TV, iTV, Canal+, Fox Soccer, ESPN that are relevant for your current location.

Where the abovementioned broadcaster is showing Lamia v PAS Giannina soccer live streaming service, you’ll be able to watch the game on your mobile (iPhone, Android including OnePlus) and computer or tablet (eg iPad, Huawei MediaPad).

After the match finishes, we may also provide a link to game highlights from time to time. We are not responsible for the transmission of any match video content linked to from this site. All legal issues must be done by contacting the hosters/owners of said content.

The Super League meeting at Municipal Stadium Lamia on Sunday will see home side Lamia take to the field against opponents PAS Giannina.

Scroll down for all of our predictions, poll and stats for the Lamia v PAS Giannina game - plus the latest match odds.

Lamia, buoyed by their previous result, will be hoping for more of the same after a 0-1 Super League triumph against Larissa.

In that game, Lamia had 48% possession and 11 attempts on goal with 6 of them on target. The only player on the scoresheet for Lamia was Bachana Arabuli (41'). At the other end, Larissa had 7 attempts at goal with 1 on target.

Fewer than three goals per game were seen in 5 of the last 6 meetings where Lamia have taken part. In terms of the goal weighting from that period, their opponents scored an aggregate of 4 and Kyanólefki managed the sum of 3.

Coming into this meeting, Lamia have not emerged victorious against PAS Giannina in their previous 3 matches in the league.

PAS Giannina head into the game after a 1-0 Super League win vs OFI Crete in their last game.

The trend of at least one team not managing to score in games involving PAS Giannina has been evident recently. A glance at their last 6 outings reveals that it has occurred 5 times. During those clashes, their opponents have managed a goal aggregate of 5 and Ajax of Epirus have scored 5. Such a trend won’t necessarily be continued into this next game, of course.

Coming into this contest, PAS Giannina have not been beaten in their last 2 league matches away from home.

The previous league game featuring these sides was Super League match day 11 on 06/12/2020 when the final score was PAS Giannina 2-0 Lamia.

In that game, PAS Giannina managed 61% possession and 6 attempts at goal with 2 of them on target. Goals were scored by Christos Eleftheriadis (30') and Giorgos Pamlidis (87').

At the other end, Lamia had 3 attempts at goal with 1 of them on target.

Tyronne (Muscle Injury), Patrick Bahanack (Muscle Injury) and Theodoros Vasilakakis (Ankle Injury) will not be able to play for Lamia gaffer Michalis Grigoriou. Lazar Romanic is ineligible for this match because of suspension.

With a completely injury-free group ready to go, PAS Giannina boss Argirios Giannikis does not have any fitness worries at all coming into this clash.

In our opinion, PAS Giannina and Lamia are both capable of scoring here.

It’s looking like it could well end up as a draw. We’re therefore anticipating a tight encounter, finishing with a score draw at the end of this game. 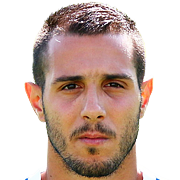 Mostly played in the Striker position, Tasos Karamanos was born in Aspropyrgos, Greece. Having made a first senior appearance for Atromitos in the 2011 - 2012 season, the talented Forward has accumulated 2 league goals in this Super League 2020 - 2021 campaign to date coming from a total of 19 appearances.

While we have made these predictions for Lamia v PAS Giannina for this match preview with the best of intentions, no profits are guaranteed. Always gamble responsibly, and with what you can afford to lose. Good luck if you do place a bet today.

⚽️ Where can I see the previews for other Super League matches?

View all of the next (and previous) Super League predictions & previews here.