View all Panathinaikos v Larissa tips, stats and our pre-match poll below including the latest game odds.

Panathinaikos fans will want a repeat of their previous result, being a 0-1 Super League triumph against Apollon Smyrni.

In that game, Panathinaikos had 43% possession and 3 attempts on goal with 2 on target. The only player on the scoresheet for Panathinaikos was Fotis Ioannidis (20'). For their opponents, Apollon Smyrni got 8 shots at goal with 6 on target.

Their latest results really do illustrate the point that not much more can be done by the Panathinaikos defence. To Trifylli have given the opposition little, with the tally of goals that have gone in at their end during their past six games standing at 4.

Going into this game, the form guide shows that Panathinaikos:

In their last fixture, Larissa drew 0-0 in the Super League match with PAS Giannina.

In that match, Larissa had 48% possession and 5 attempts on goal with 1 on target. At the other end, PAS Giannina got 8 shots at goal with 3 of them on target.

It has become apparent that Larissa have struggled for goals over their last 6 games, contributing the disappointing return of just 3. In those fixtures, Larissa have also seen the collective goal aggregate of their opponents equal 12. That sort of trend won’t necessarily be sustained into this game, of course.

Looking at their past form shows that Larissa:

An examination of their most recent head-to-head meetings dating back to 19/02/2018 shows that Panathinaikos have won 3 of them and Larissa 1, with the tally of drawn matches standing at 2.

In all, 14 goals were shared by the two clubs during those clashes, with 9 for To Trifylli and 5 netted by Larissa. That is an average goals per game value of 2.33.

The previous league clash between the two was Super League match day 3 on 28/09/2020 when the final score was Larissa 1-1 Panathinaikos.

In that game, Larissa had 38% possession and 3 shots on goal with 3 on target. The scorer was Dimitris Pinakas (87').

Panathinaikos had 6 shots at goal with 2 on target. Federico Macheda (26') scored.

The referee was Anastasios Papapetrou.

Panathinaikos manager László Bölöni has zero fitness concerns at all coming into this game thanks to a fully healthy group available to choose from.

With a completely injury-free group available to select from, Larissa boss Giannis Tatsis has zero fitness concerns to speak of coming into this clash.

Our assessment is that Panathinaikos can be able to score a couple when they meet Larissa, who could well find it tough scoring.

We therefore think that it’s going to be a 2-0 margin for Panathinaikos by the time that the referee blows the final whistle. 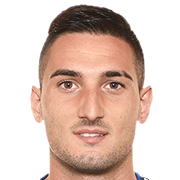 Usually taking to the field in the Striker position, Federico Macheda was born in Rome, Italy. After making a first senior appearance for Manchester United in the 2008 - 2009 season, the dangerous Forward has scored 4 league goals in the Super League 2020 - 2021 campaign so far in 15 appearances.

While we have made these predictions for Panathinaikos v Larissa for this match preview with the best of intentions, no profits are guaranteed. Always gamble responsibly, and with what you can afford to lose. We wish you the best of luck.