Our predictions, user poll and statistics for Legia Warsaw v Pogon Szczecin can be found here - as well as the best betting odds.

Legia Warsaw are hoping to win again after their last result, a 0-4 Ekstraklasa victory against Zagłębie Lubin.

Legia Warsaw haven’t been able to stop scoring goals, netting in one hundred percent of their last 6 games.

They have claimed a sum of 16 during that period while also conceding a total of 6.

Taking a look at their past results, Legia Warsaw:

Pogon Szczecin will go into this clash following on from a 1-0 Ekstraklasa win over Lechia Gdańsk in their most recent fixture.

It is worth noting that Pogon Szczecin have failed to get amongst the goals in their past 6 clashes, netting the disappointing return of just 4. In those matches, Pogoń have also seen the overall goal aggregate of opposing teams equal 5. We will have to see if that trend will end up being continued on here.

Going into this contest, Pogon Szczecin haven't been defeated by Legia Warsaw when they've played them away from home in the last 3 league games.

A look at their prior head-to-head clashes dating back to 13/04/2019 tells us that Legia Warsaw have won 1 of these games and Pogon Szczecin 3, with the number of drawn results standing at 2.

A combined sum of 16 goals were scored between the two sides throughout the course of those matches, with 7 from Wojskowi and 9 being from Pogoń. This gives an average number of goals per game equal to 2.67.

The previous league meeting between the two was Ekstraklasa match day 8 on 24/10/2020 when it finished Pogon Szczecin 0-0 Legia Warsaw.

Legia Warsaw boss Czesław Michniewicz does not have any fitness concerns to speak of ahead of this clash thanks to a completely healthy squad to pick from.

Due to a mostly full-strength group, there’s just the sole fitness worry for the Pogon Szczecin manager Kosta Runjaić to be concerned about. Igor Lasicki (Cruciate Ligament Rupture) won’t be in action.

Pogon Szczecin will surely be able to find the net against this Legia Warsaw side, however that possibly won’t quite be as many as the goals that they could concede.

We reckon that it will be a very close game with a 2-1 winning margin for Legia Warsaw after the 90. Could easily see this go either way. 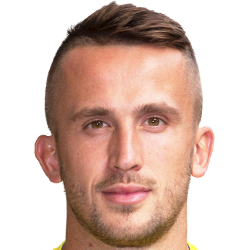 Mostly taking up the Striker position, Tomáš Pekhart was born in Czech Republic. Having made a first senior appearance for Southampton in the 2008 - 2009 season, the accomplished Forward has accumulated 19 league goals in this Ekstraklasa 2020 - 2021 season to date in 19 appearances.

While we have made these predictions for Legia Warsaw v Pogon Szczecin for this match preview with the best of intentions, no profits are guaranteed. Always gamble responsibly, and with what you can afford to lose. Good luck if you do place a bet today.