All Tottenham Hotspur v Leicester City match predictions, user poll and stats are shown below (plus the best game odds).

Tottenham Hotspur will be looking to improve on their last outing here following a 0-1 Premier League defeat in their last game at the hands of Leicester City.

Under three goals per match were scored during 5 of the past 6 meetings where Tottenham Hotspur have been involved. Regarding the goal split in that period, their opponents scored a total of 4 while Tottenham Hotspur managed a tally of 8.

Demonstrating their involvement in action-packed encounters, goals have been seen as many as 20 times in the prior 6 matches in which Leicester City have taken to the field, yielding an average of 3.33 goals each clash. Opposing teams have got 14 of those goals. That kind of trend isn’t assured to be continued into this match, of course.

A review of their past head to head meetings going back to 21/09/2019 shows that Tottenham Hotspur have won 4 of them & Leicester City 2, with the tally of drawn matches standing at 0.

Those games weren’t short on goals, either, with 23 in all at an average of 3.83 goals per match.

The last league contest between the two was Premier League match day 8 on 17/09/2022 which finished with the scoreline of Tottenham Hotspur 0-1 Leicester City.

In that match, Tottenham Hotspur managed 49% possession and 0 attempts on goal with 0 on target.

Leicester City got 1 attempts on goal with 1 of them on target. Youri Tielemans (6') was the scorer.

Nearly everyone is up for selection, with just one fitness concern for the Tottenham Hotspur gaffer Antonio Conte to be concerned about from an otherwise fully-primed squad. Lucas Moura (Calf Injury) won’t play.

Leicester City manager Brendan Rodgers has to contend with a number of unavailable players. Ryan Bertrand (Knee Surgery) and Ricardo Pereira (Achilles tendon rupture) are those who can’t be considered.

Tottenham Hotspur should dominate on the ball and be rewarded with decent chances.

In contrast, Leicester City will be up against it to make a breakthrough - but, we do see them hitting back at some stage.

We therefore think that it’s going to be a decent 3-1 win for Tottenham Hotspur at the end of the match. 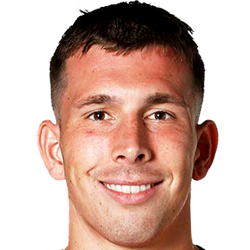 Customarily deployed in the Central Defensive Midfielder position, Pierre-Emile Højbjerg was born in Copenhagen, Denmark. After making a first senior appearance for Bayern Munich in the 2012 - 2013 season, the talented Midfielder has managed 2 league goals in this Premier League 2022 - 2023 season to date from a total of 6 appearances.

We have made these Tottenham Hotspur v Leicester City predictions for this match preview with the best intentions, but no profits are guaranteed. Please always gamble responsibly, only with money that you can afford to lose. Best of luck.