Stoke City are in action against Leyton Orient in Sunday’s FA Cup fixture.

Our predictions, user poll and statistics for Stoke City v Leyton Orient can be found here (plus the best game odds).

Stoke City will be hoping to return to winning ways here following the 1-2 Championship loss in their previous game against Preston North End.

Stoke City have not been in good attacking form of late. Their goals record stands at just 4 versus opposing sides over their last 6 matches. In those games, Stoke City have also seen the number of goals that have gone against them come to 6. Such a pattern isn’t assured to be carried forward into this next game, of course.

Since a losing effort in their last game against Tranmere Rovers in League Two competition, Leyton Orient will be hoping to turn things around here.

Jay Spearing (58') was the scorer for Tranmere Rovers.

Looking at their form, and Leyton Orient have been scored against in 5 of their last 6 matches, seeing opposing sides hit 6 goals in total. Defensively, Leyton Orient certainly have room for improvement.

Checking on their past head to head clashes stretching back to 13/04/1991 shows that Stoke City have won 4 of these games & Leyton Orient 2, with the tally of draws being 0.

11 goals were yielded between them in these games, with 7 for The Potters and 4 coming from The O's. That is an average goals per game value of 1.83.

Owing to a completely healthy squad available to select from, the Leyton Orient manager Kenny Jackett doesn’t have any fitness worries whatsoever coming into this game.

It looks to us that Stoke City certainly have the ability to get a couple of goals in this one when they come up against Leyton Orient, who might well find it a difficult task getting on the scoresheet.

We therefore think that it’s going to be a pretty comfortable 2-0 margin for Stoke City at the end of the match. 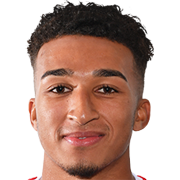 Regularly taking up the Striker position, Jacob Brown was born in Halifax, England. Having made his senior debut playing for Barnsley in the 2016 - 2017 season, the gifted Forward has accumulated 5 league goals in the Championship 2021 - 2022 season to date coming from a total of 24 appearances.

We have made these Stoke City v Leyton Orient predictions for this match preview with the best intentions, but no profits are guaranteed. Please always gamble responsibly, only with money that you can afford to lose. Best of luck with your selections.