Leyton Orient will want to continue from where they left off last time out with a 1-0 League Two victory versus Walsall.

The only scorer from Leyton Orient was Omar Beckles (58').

Richie Wellens's Leyton Orient have found the net a sum total of 11 times in their preceding half-dozen outings. The comparative number of goals that they have conceded in those same games stands at 8.

Sutton United head into the meeting following a 2-0 League Two win against Hartlepool United in their most recent outing.

For Sutton United, the scorers were Will Randall (53') and Harry Beautyman (66').

Matt Gray's Sutton United have found the back of the net a total of 9 times in the course of their most recent six matches. The aggregate of goals that have been scored against them during that period adds up to 5.

Checking out their prior head to head meetings going back to 05/08/2017, both clubs have shared the honours with Leyton Orient winning 3 of those games, Sutton United 3 and 0 being draws in normal time.

A combined sum of 17 goals were yielded between them throughout the course of those matches, with 10 of them from The O's and 7 netted by The U's. That’s an average goals per game figure of 2.83.

The previous league game between these sides was League Two match day 41 on 09/04/2022 when the final score was Sutton United 1-0 Leyton Orient.

The Leyton Orient manager Richie Wellens does not have any fitness worries whatsoever coming into this match with a completely healthy group available to select from.

Due to a completely healthy squad available for selection, the Sutton United boss Matt Gray doesn’t have any fitness concerns to speak of ahead of this match.

We envisage that Sutton United should get enough chances to score against this Leyton Orient lineup, however it possibly won’t quite be as many as they’ll concede.

Our tip is for a very close game with a 2-1 winning margin for Leyton Orient when all is said and done. Expecting it to be very competitive. 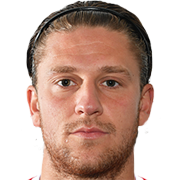 Typically deployed in the Centre Midfield position, George Moncur was born in Swindon, England. Having played his first senior match for AFC Wimbledon in the 2011 - 2012 season, the talented Midfielder has got 3 league goals in this League Two 2022 - 2023 campaign to date in a total of 8 appearances.

We have made these Leyton Orient v Sutton United predictions for this match preview with the best intentions, but no profits are guaranteed. Please always gamble responsibly, only with money that you can afford to lose. Best of luck with your selections.