Warrenpoint Town come up against visiting rivals Linfield at Milltown in this Premiership tie on Saturday.

Our Warrenpoint Town v Linfield tips, poll and stats can be seen in full below (plus the best game odds).

Warrenpoint Town will be hoping for a better result following the 2-3 Premiership defeat in their last game at the hands of Portadown.

Warrenpoint Town have struggled with their forward play in recent times. Their goals record stands at just 3 versus opposition teams over the course of their previous 6 outings. In those meetings, Warrenpoint Town have also seen the number of goals against them come to 17.

Linfield come into this meeting after a 4-0 Premiership win as they beat Carrick Rangers in their previous outing.

A series of hard-working displays by the Linfield defenders has seen their ‘goals against’ tally standing at 4 from their previous 6 clashes overall. Over that same period of time, the number of goals that they have scored themselves is 12. Such a pattern might not be sustained into this next game, though.

Looking over their most recent head to head meetings dating back to 22/10/2019 shows that Warrenpoint Town have won 1 of these games & Linfield 5, with the tally of drawn results standing at 0.

There were also plenty of goals scored in those games, 26 in all at an average of 4.33 goals per match.

The previous league meeting featuring these sides was Premiership match day 27 on 09/03/2021 and the score finished Linfield 5-0 Warrenpoint Town.

The match was refereed by Shane Andrews.

The Warrenpoint Town boss Barry Gray does not have any fitness concerns to speak of ahead of this clash owing to a fully injury-free squad available for selection.

Owing to a completely healthy group to pick from, the Linfield manager David Healy doesn’t have any fitness concerns whatsoever ahead of this clash.

We’re of the opinion that Warrenpoint Town have it within them to get a goal against this Linfield side, but a single goal isn’t likely to be enough to prevent defeat.

Our tip is for both teams to score in a 1-2 win for Linfield at full-time. Could easily go either way, this. 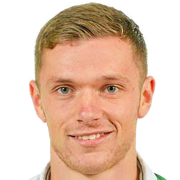 Mostly played in the Centre Midfield position, Kealan Dillon was born in Rep. Ireland. After having played his first senior match for Athlone in the 2014 season, the gifted Midfielder has netted 2 league goals in this Premiership 2021 - 2022 campaign to date in 7 appearances.

While we have made these predictions for Warrenpoint Town v Linfield for this match preview with the best of intentions, no profits are guaranteed. Always gamble responsibly, and with what you can afford to lose. Good luck if you do place a bet today.