Scroll down to see all of the predictions, poll and statistics for Spartak Moscow v Lokomotiv Moscow including the latest game odds.

Spartak Moscow will be wanting a better result here after the 4-2 Premier League losing effort in their last game against FC Rostov.

Fixtures featuring Spartak Moscow have tended to be absorbing encounters lately with plenty of scoring anticipated. Over their past six clashes, a grand total of 20 goals have gone in for both sides combined (at an average of 3.33 goals per game) with 12 of those accredited to Spartak Moscow. Nevertheless, time will tell whether the trend might be maintained in this game.

Going into this encounter, Spartak Moscow haven't won against Lokomotiv Moscow in their last 3 league matches.

Since suffering a loss in their previous game against Fakel Voronezh in Premier League competition, Lokomotiv Moscow will be aiming to make amends here.

Going into this encounter, Lokomotiv Moscow have not won against Spartak Moscow when they've played them away from home in the last 4 league games. They really have not been travelling well at all.

If we look at their past head to head meetings stretching back to 27/10/2019, neither club has come out on top overall with Spartak Moscow winning 2 of those games, Lokomotiv Moscow 2 and 2 being draws in normal time.

A total of 13 goals were scored between them in this period, with 7 of them for Narodnaya komanda and 6 being from Loko. That is an average goals per game value of 2.17.

The last league game between the two was Premier League match day 23 on 02/04/2022 when the final score was Lokomotiv Moscow 1-0 Spartak Moscow.

In that match, Lokomotiv Moscow managed 50% possession and 7 shots on goal with 1 of them on target. Their only player on the scoresheet was Wilson Isidor (85').

At the other end, Spartak Moscow got 7 shots on goal with 4 of them on target.

Here is a game where Lokomotiv Moscow will need to push hard to breach the defence of this Spartak Moscow lineup who we reckon should do enough to score at the other end and edge ahead.

With that in mind, we reckon that it will be a narrow 1-0 advantage for Spartak Moscow when all is said and done. 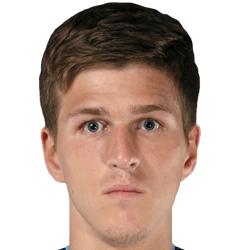 Generally playing in the Striker position, Aleksandr Sobolev was born in Barnaul, Russia. After having played his first senior match for Tom Tomsk in the 2016 - 2017 season, the skilful Forward has managed to score 3 league goals in this Premier League 2022 - 2023 campaign to date in 9 appearances.

We have made these Spartak Moscow v Lokomotiv Moscow predictions for this match preview with the best intentions, but no profits are guaranteed. Please always gamble responsibly, only with money that you can afford to lose. Best of luck.