This Minnesota United v Los Angeles Galaxy live stream video is ready for broadcast on 19/05/2022. Fans of both clubs can watch this game on a live streaming service if this match is included in the schedule referenced above. Here we show useful information for watching this MLS match including the most recent guide to form, h2h meetings and our game tips.

In order to view this match via alternative ways, check TV channel schedules for your country. Such broadcasting rights are typically allocated on a per-competition/league or even per-match arrangement basis. For fixtures shown live on regional tv programmes, check the listings on channels including BT Sport, Amazon Prime Video, Sky Sports, Now TV, iTV, Canal+, Fox Soccer, ESPN relevant to your location.

When the abovementioned broadcaster indicates that they have the Minnesota United v Los Angeles Galaxy soccer live streaming coverage, you’ll be able to see the game on a mobile (iPhone, Android including Infinix) and desktop plus tablet (eg iPad, Acer ACTAB).

After the match finishes, we might also provide a link to match highlights from time to time. We are not responsible for the transmission of any match video content linked to from here. All legal issues must be directed to the hosters/owners of the content.

Minnesota United will be wanting a better result here following a 3-1 MLS defeat in their last game at the hands of Seattle Sounders FC.

Adrian Heath's Minnesota United have hit the target 8 times in their past six outings. Conversely, the tally of goals that they have conceded in that same time stands at 7.

Following on from tasting defeat last time out to FC Dallas in MLS action, Los Angeles Galaxy will be hoping to turn things around here.

Greg Vanney's Los Angeles Galaxy have fired home 7 times in the course of their previous six matches. The aggregate of goals that they have conceded during those same clashes comes to 6.

A glance at their past head to head meetings dating back to 17/03/2019 tells us that Minnesota United have won 1 of them and Los Angeles Galaxy 3, with the number of drawn matches standing at 2.

18 goals were shared by the two clubs in this period, with 9 of them for Loons and 9 created by The Galactics. That’s an average goals per game of 3.

The last league fixture featuring these sides was MLS match day 46 on 07/11/2021 which finished with the scoreline of Los Angeles Galaxy 3-3 Minnesota United.

From a largely healthy group of players, there’s only the one fitness problem for the Los Angeles Galaxy boss Greg Vanney to be concerned with. Adam Saldaña (Ankle Injury) misses out for this game.

We are inclined to think that The Galactics might begin the game with a 4-2-3-1 system with a starting lineup of Jonathan Bond, Julian Araujo, Sega Coulibaly, Derrick Williams, Chase Gasper, Rayan Raveloson, Marco Delgado, Douglas Costa, Efrain Álvarez, Kévin Cabral and Javier Hernandez.

For this match, we think that Los Angeles Galaxy should have enough to find the back of the net against this Minnesota United side, although it might not quite be as many as they will have scored against them.

Our selection here is for a 2-1 winning margin for Minnesota United when all is said and done. We are expecting it to be pretty even. 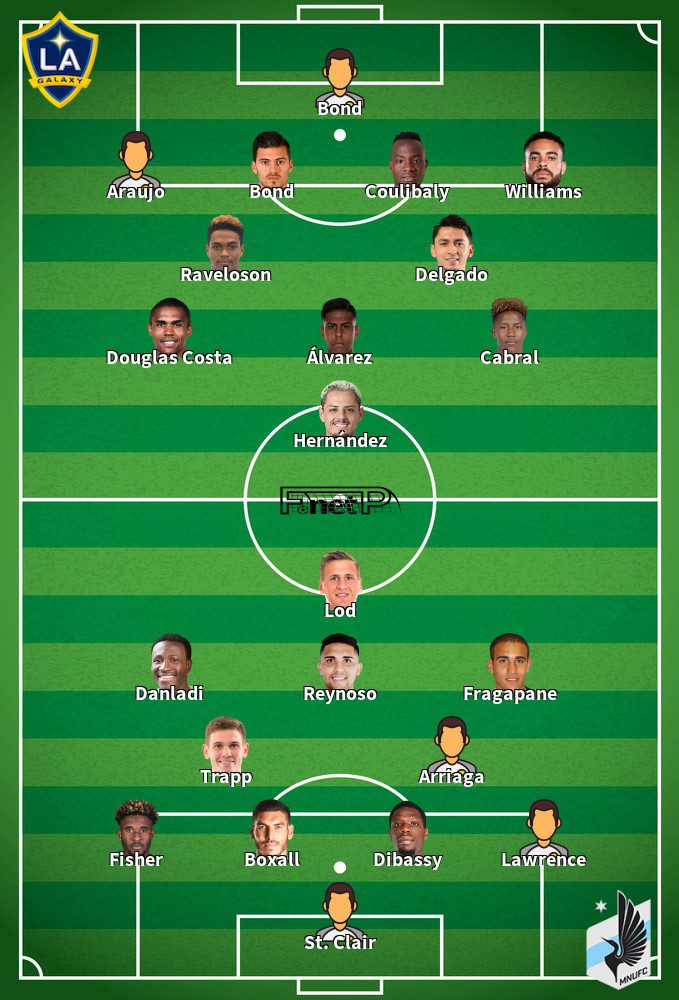 We have made these Minnesota United v Los Angeles Galaxy predictions for this match preview with the best intentions, but no profits are guaranteed. Please always gamble responsibly, only with money that you can afford to lose. Good luck with your selections.

⚽️ Where can I see the predictions for other MLS matches?

Look at all of the upcoming (and previous) MLS predictions & previews here.