Lugano face off with visiting team Servette FC at Stadio Cornaredo in this Super League match on Wednesday.

All Lugano v Servette FC game predictions, stats and user poll are shown below - along with the latest match odds.

Lugano will be wanting a better result here following the 1-3 Super League defeat in their last game at the hands of BSC Young Boys.

It’s been seldom in recent games where Lugano have managed to hold out for a full 90 minutes. In fact, Lugano have failed to prevent opponents from scoring in 5 of their previous 6 matches, leaking 9 goals along the way. We shall soon see if that trend can be continued on into this next match.

Coming into this contest, Lugano have not won at home in their last 5 league matches. Things will have to change soon.

After a loss in their previous game against FC Lausanne-Sport in Super League action, Servette FC and their fans will hope to get a better result this time.

Servette FC have been a threat going forward in the lead-up to this encounter, scoring 9 times in their previous 6 matches. Having said that, Les Grenats have had their own issues at the back, also conceding in 6 of those same clashes.

Going into this one, Servette FC haven’t won away from home in the past 2 league matches.

The last league fixture featuring the two was Super League match day 8 on 22/11/2020 and the score finished Servette FC 1-1 Lugano.

There’s just the sole fitness concern for the Lugano manager Maurizio Jacobacci to be concerned about from of an almost fully healthy set of players. Mijat Maric (Unknown Injury) is out of contention.

In our opinion, Servette FC should be able to find the back of the net against this Lugano outfit, although it may not quite be as many as the goals that they could concede.

Our tip is for both teams to score in a 2-1 victory for Lugano by the time that the referee blows the final whistle. Should be a good one. 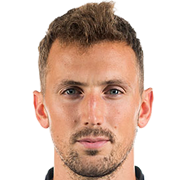 Customarily playing in the Striker position, Alexander Gerndt was born in Visby, Sweden. Having made his senior debut playing for AIK in the 2007 season, the talented Forward has netted 4 league goals in the Super League 2020 - 2021 campaign so far coming from a total of 17 appearances.

We have made these Lugano v Servette FC predictions for this match preview with the best intentions, but no profits are guaranteed. Please always gamble responsibly, only with money that you can afford to lose.