The 3rd Liga match at Hänsch-Arena on Saturday will see home side Meppen go up against Magdeburg.

For all of our match predictions, pre-game poll and statistics for Meppen v Magdeburg, scroll down - as well as the best betting odds.

Meppen head into this game after a 0-0 3rd Liga drawn game against Magdeburg.

Fewer than three goals per game were recorded in 5 of the past 6 fixtures where Meppen have been participants. With regard to the goal attribution during this period, opposition teams scored a total of 5 and Meppen got themselves 5. That pattern won’t necessarily follow through into this next game, though.

In their previous 6 outings, Magdeburg have bagged the sum of 14 goals. Magdeburg have also scored in every single one of those games. During that period, they’ve had 7 goals scored by their opponents.

A review of their prior head-to-head meetings dating back to 02/08/2017 shows us that Meppen have won 1 of these games & Magdeburg 3, with the number of drawn games standing at 2.

A sum of 12 goals were produced between them throughout the course of those matches, with 5 of them for Meppen and 7 for Magdeburg. The average goals per game has been 2.

We’ve got the feeling that Meppen might need a bit of good fortune to get anything against this Magdeburg lineup who we reckon should do enough to score at the other end and edge ahead.

We’re therefore anticipating a 0-1 winning margin for Magdeburg at the conclusion of the game. 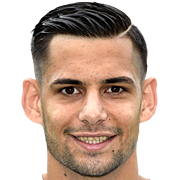 Normally deployed in the Striker position, Luka Tankulic was born in Ahlen, Germany. Having made his senior debut playing for Ahlen in the 2009 - 2010 season, the goalscoring Forward has got 3 league goals in this 3. Liga 2021 - 2022 season to date in 11 appearances.

We have made these Meppen v Magdeburg predictions for this match preview with the best intentions, but no profits are guaranteed. Please always gamble responsibly, only with money that you can afford to lose. We wish you the best of luck.