SD Huesca will face off against away team Málaga at Estadio El Alcoraz in the La Liga 2 game on Tuesday.

To see all of our predictions, user poll & stats for SD Huesca v Málaga, scroll down (including the best match odds).

SD Huesca will be hoping for a repeat of their last result, following a 1-3 La Liga 2 success vs Girona FC.

In their prior six fixtures, Ignacio Ambriz's SD Huesca have hit the back of the net 8 times which gives them an average number of goals scored per match equal to 1.33.

Coming into this contest, SD Huesca have not won at home in their last 3 league matches.

José Alberto López's Málaga have converted 6 times in the course of their most recent 6 matches. The number of goals that they have conceded during those same matches comes to 8.

Going into this contest, Málaga are without an away win for the past 9 matches in the league. A poor run.

On that occasion, Málaga managed 60% possession and 14 shots on goal with 5 of them on target. Their only player to score was Armando Sadiku (42').

The SD Huesca manager Ignacio Ambriz will be grateful to have no fitness worries to speak of ahead of this game owing to a fully healthy squad available to select from.

Thanks to a largely full-strength squad, there is just the sole fitness worry for the Málaga boss José Alberto López to be concerned with. Luis Muñoz (Ruptured knee ligament) misses out for this game.

It looks to us that SD Huesca have it within them to be able to score a couple when they come up against Málaga, who will not find it easy to find the back of the net.

Our selection here is for a controlled 2-0 victory for SD Huesca by the time that the referee blows the final whistle. 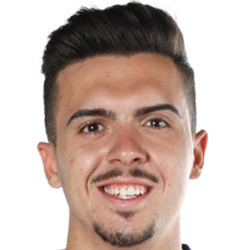 Mostly playing in the Left Attacking Midfielder position, Joaquín Muñoz was born in Málaga, Spain. Having made a first senior appearance for Atlético Madrid in the 2018 - 2019 season, the gifted Midfielder has managed 2 league goals in this LaLiga2 2021 - 2022 season so far in a total of 7 appearances.

While we have made these predictions for SD Huesca v Málaga for this match preview with the best of intentions, no profits are guaranteed. Always gamble responsibly, and with what you can afford to lose. Good luck!