Marseille will be hosting the visiting Strasbourg at Stade Vélodrome in the Ligue 1 meeting on Friday.

All Marseille v Strasbourg match predictions, user poll and stats are shown below (plus the best game odds).

Marseille will be looking for a repeat result of the 1-3 Ligue 1 triumph versus Reims.

It’s been a rare occasion in recent games that Marseille haven’t conceded. In fact, Les Olympiens have failed to prevent opponents from scoring in 5 of their previous 6 games, shipping 10 goals on the way. That pattern won’t necessarily be carried forward into this game, of course.

After tasting defeat last time out to Nantes in Ligue 1 competition, Strasbourg and their fans will hope to get a better result this time.

In that game, Strasbourg had 64% possession and 13 attempts at goal with 4 of them on target. The scorer for Strasbourg was Ludovic Ajorque (43'). FC Nantes got 7 attempts on goal with 5 on target. Jean-Charles Castelletto (53') and Ludovic Blas (76') scored for Nantes.

The numbers tell their own story, and Strasbourg have been scored against in 6 of their last 6 games, with opponents netting 12 goals in total. In defence, Le Racing have been far from perfect.

Ahead of this clash, Strasbourg are undefeated in their last 2 league matches away from home.

Looking over their past head to head meetings going back to 16/01/2018 reveals that these fixtures have been pretty painful for Strasbourg. They have not managed to register any wins at all whereas Marseille have simply been better than them, finishing as winners in 83% of those match-ups.

A sum of 16 goals were scored between the two sides throughout the course of those matches, with 12 of them for Les Olympiens and 4 netted by Le Racing. The average goals per game has been 2.67.

The last league fixture featuring these sides was Ligue 1 match day 10 on 06/11/2020 which ended up with the score at Strasbourg 0-1 Marseille.

On that day, Strasbourg managed 51% possession and 9 shots on goal with 2 on target.

For their opponents, Marseille got 1 attempts on goal with 1 on target. Morgan Sanson (72') was the scorer.

From a largely available group of players, there is only the lone fitness worry for the Strasbourg manager Thierry Laurey to contend with. Mohamed Simakan (Arthroscopie) won’t be in action.

We feel that over the course of the game, Strasbourg will have their work cut out to find the net against this Marseille team who will likely just have the edge.

We therefore think that it’s going to be a narrow 1-0 winning score for Marseille when the full-time whistle blows. 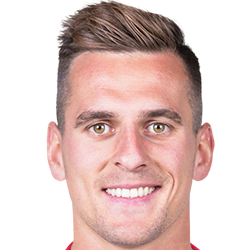 Normally played in the Striker position, Arkadiusz Milik was born in Tychy, Poland. Having made a first senior appearance for Górnik Zabrze in the 2011 - 2012 season, the goalscoring Forward has managed 5 league goals in this Ligue 1 2020 - 2021 season so far from a total of 11 appearances.

While we have made these predictions for Marseille v Strasbourg for this match preview with the best of intentions, no profits are guaranteed. Always gamble responsibly, and with what you can afford to lose. We wish you the best of luck.