Mezőkövesd take on guests Videoton FC at Mezőkövesdi Városi Stadion in the Nemzeti Bajnokság I tie on Saturday.

Full predictions, pre-match stats and user poll for Mezőkövesd v Videoton FC are shown on this page (plus the best game odds).

Mezőkövesd will be wanting a better result here after a 2-0 Nemzeti Bajnokság I losing effort in their last game against Kisvárda.

It’s been all too rare in recent times where Mezőkövesd haven’t conceded. In fact, Mezőkövesd have seen their defence breached in 5 of their previous 6 clashes, giving up 11 goals on the way. That pattern won’t necessarily be carried forward into this next game, of course.

Going into this game, the form guide shows that Mezőkövesd:

Videoton FC will go into this match after a 2-1 Nemzeti Bajnokság I win with the eclipse of MTK Budapest in their most recent outing.

Videoton FC have been a threat going forward of late, scoring 7 goals in their previous 6 matches. Having said that, Videoton FC have had their own issues at the back, also conceding in 6 of those same clashes.

A review of their most recent head to head clashes going back to 19/10/2019 shows us that Mezőkövesd have won 1 of these games and Videoton FC 3, with the tally of drawn games standing at 2.

A combined total of 13 goals were scored between the two sides in this period, with 5 of them from Mezőkövesd and 8 for Vidi. The average goals per game has been 2.17.

The last league clash between the two was Nemzeti Bajnokság I match day 30 on 21/04/2021 when it ended Mezőkövesd 1-3 Videoton FC.

Almost everyone can be considered, as there’s just one fitness concern for the Mezőkövesd boss Attila Pintér to be concerned about thanks to an otherwise robust group of players. Luka Lakvekheliani (Knee Injury) won’t play.

With a completely injury-free group to choose from, the Videoton FC manager Imre Szabics has zero fitness worries to speak of coming into this match.

We feel that over the course of the game, Mezőkövesd could find themselves up against it to score against this Videoton FC side who we think might gain the upper hand.

That’s why we have predicted a very competitive game with a 0-1 winning score for Videoton FC when the referee blows for full-time. 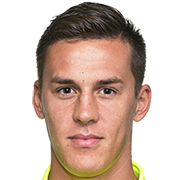 Mostly played in the Striker position, Marin Jurina was born in Livno, Bosnia and Herzegovina. After having made a senior debut playing for Zadar in the 2013 - 2014 season, the goalscoring Forward has hit 2 league goals in the Nemzeti Bajnokság I 2021 - 2022 campaign to date coming from a total of 5 appearances.

We have made these Mezőkövesd v Videoton FC predictions for this match preview with the best intentions, but no profits are guaranteed. Please always gamble responsibly, only with money that you can afford to lose. We wish you the best of luck.