Reims line up against away team Monaco at Stade Auguste-Delaune in the Ligue 1 tie on Sunday.

Reims will be wanting a better result here following a 1-0 Ligue 1 loss in their previous game against Toulouse.

In that match, Reims managed 53% possession and 10 attempts at goal with 1 of them on target. At the other end, Toulouse got 14 shots on goal with 3 on target. Zakaria Aboukhlal (31') scored for Toulouse.

It’s been all too rare in recent games that Reims haven’t conceded. In fact, Reims have seen their defence breached in 6 of their previous 6 matches, leaking 10 goals on the way. Regardless, we will just have to wait and see whether the trend shall persist in this next match or not.

Analysis of their past results shows that Reims:

Following on from a loss in their previous game against Ferencvárosi TC in Europa League action, Monaco and their travelling fans will hope for a better result here.

In that game, Monaco had 57% possession and 13 shots on goal with 6 of them on target. On the other side, Ferencváros got 8 shots at goal with 3 on target. Bálint Vécsei (79') was the scorer for Ferencvárosi TC.

Philippe Clement's Monaco have managed to stick the ball in the net 7 times throughout their previous sextet of matches. The overall goals that they have conceded during the equivalent period comes to 7.

Their previous form shows that Monaco:

A look at their prior head to head meetings dating back to 04/01/2020 tells us that Reims have won 1 of these and Monaco 2, with the tally of drawn results being 3.

13 goals were scored between the two sides in this period, with 6 of them from Les rouges et blancs and 7 for Les Rouge et Blanc. This gives an average number of goals per game equal to 2.17.

The previous league clash between the two was Ligue 1 match day 26 on 27/02/2022 which finished with the scoreline of Monaco 1-2 Reims.

In that match, Monaco managed 69% possession and 18 shots on goal with 5 on target. The goalscorers were Wissam Ben Yedder (55') and Kevin Volland (84' Own goal).

On the other side, Reims had 12 attempts at goal with 7 of them on target. Nathanaël Mbuku (93') scored.

Monaco manager Philippe Clement has to contend with a number of unavailable players. Guillermo Maripán (Abdominal Strain) and Kevin Volland (Sprained Ankle) will miss out on this game.

Reims will really need to work well to breach the defence of this Monaco team who we think will gain the upper hand.

That’s why our selection here is for a hard-fought 0-1 winning score for Monaco when the referee blows for full-time. 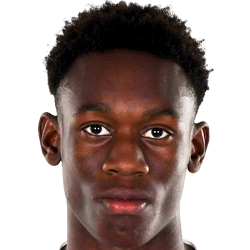 Typically used in the Striker position, Folarin Balogun was born in New York, USA. Having played his first senior match for Arsenal in the 2021 - 2022 season, the goalscoring Forward has struck 5 league goals in the Ligue 1 2022 - 2023 season to date in a total of 7 appearances.

We have made these Reims v Monaco predictions for this match preview with the best intentions, but no profits are guaranteed. Please always gamble responsibly, only with money that you can afford to lose. Good luck if you do place a bet today.