This Nashville v Montreal Impact live stream video is ready for broadcast on 19/05/2022. Fans of both clubs can watch the match on a live streaming service if this match is included in the schedule provided above. Here we give useful information for watching this MLS game including the most recent team form, h2h clashes and our game views.

In order to watch the match via other ways, search for tv listings relating to your locality. These broadcasting contracts are typically allocated on a per-competition/league or even per-fixture arrangement basis. For games shown live on regional tv programmes, check the schedules on channels such as BT Sport, Amazon Prime Video, Sky Sports, Now TV, iTV, Canal+, Fox Soccer, ESPN depending on your location.

Where the abovementioned broadcaster does broadcast a Nashville v Montreal Impact football live streaming coverage, you’ll be able to see it on mobile devices (iPhone, Android including OnePlus) and computer plus tablet (eg iPad, Alba).

After the match finishes, we may also provide a link to highlights from time to time. We aren’t responsible for transmitting any match video content linked to from here. All legal issues must be done by contacting the hosters/owners of such content.

Our Nashville v Montreal Impact predictions, statistics and match poll can be seen below (inc. the best betting odds).

Nashville won’t want a repeat of their last result here after a 2-0 MLS defeat in their last game at the hands of Houston Dynamo.

It has been seldom in recent games that Nashville have managed to hold out for a full 90 minutes. In fact, Nashville have been scored against in 5 of their previous 6 matches, leaking 7 goals on the way. Having said that, we will just have to wait and see whether that pattern might be maintained here in this match.

Montreal Impact will go into the match following on from a 0-2 MLS win with the eclipse of Charlotte FC in their last fixture.

In that match, Montreal Impact managed 44% possession and 13 shots at goal with 3 of them on target. For Montreal Impact, goals were scored by Djordje Mihailovic (45') and Alistair Johnston (67'). Charlotte FC got 15 attempts on goal with 4 on target.

Montreal Impact have been a threat going forward of late, scoring 13 times in their previous 6 matches. This doesn’t mask the fact that Montreal Impact can also improve defensively after being scored against in 5 of those same clashes.

The previous league encounter between these sides was MLS match day 32 on 12/09/2021 which finished with the scoreline of Montreal Impact 0-1 Nashville.

In that match, Montreal Impact managed 59% possession and 14 shots on goal with 3 of them on target.

On the other side, Nashville had 13 attempts at goal with 8 of them on target. Walker Zimmerman (66') scored.

The referee was Silviu Petrescu.

The Nashville manager Gary Smith has no fitness worries at all coming into this match thanks to a completely injury-free group ready to go.

Owing to a completely injury-free squad ready to go, the Montreal Impact manager Wilfried Nancy has no fitness worries to report before this match.

We’re of the view that Nashville certainly have the ability to get a couple of goals in this one against Montreal Impact, who will not find it easy to find the back of the net.

We’re therefore expecting to see a comfortable 2-0 win for Nashville by the time that the referee blows the final whistle. 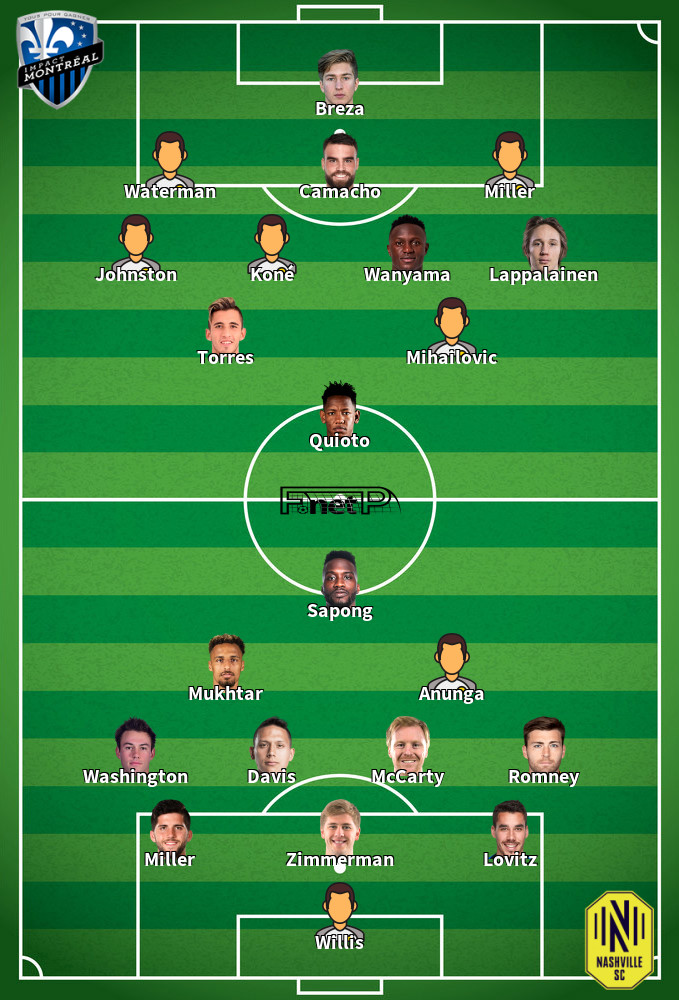 While we have made these predictions for Nashville v Montreal Impact for this match preview with the best of intentions, no profits are guaranteed. Always gamble responsibly, and with what you can afford to lose. We wish you the best of luck.

⚽️ Where can I find the odds for other MLS matches?

You can see all of the upcoming (and previous) MLS predictions & previews here.