Újpest FC take on visiting side MTK Budapest at Szusza Ferenc Stadion in the Nemzeti Bajnokság I tie on Sunday.

Our Újpest FC v MTK Budapest predictions, statistics and match poll can be seen below - as well as the best betting odds.

Újpest FC will be looking to improve on their last outing here following the 2-0 Nemzeti Bajnokság I loss in their previous game against Ferencvárosi TC.

It’s been all too rare in recent games where Újpest FC have shown defensive steel. The facts show that Lilák have seen their defence breached in 5 of their previous 6 games, letting in 15 goals along the way. Regardless, it remains to be seen if such a trend shall continue on in this next match or not.

Ahead of this clash, Újpest FC haven't beaten MTK Budapest in their previous 9 league matches.

Last time out, MTK Budapest drew 1-1 in the Nemzeti Bajnokság I tie with Kisvárda.

The only scorer from MTK Budapest was Daniel Gera (24'). Márk Kovácsréti (60') was the scorer for Kisvárda.

Looking at their form, and MTK Budapest have been scored against in 5 of their last 6 games, conceding 11 goals overall. In defence, MTK have clearly had some problems.

Ahead of this clash, MTK Budapest have not been beaten by Újpest FC when they've played them away from home in the last 6 matches in the league. Travelling fans have really enjoyed these clashes.

A glance at their past head to head meetings stretching back to 21/08/2016 shows that Újpest FC have won 0 of these games and MTK Budapest 3, with the number of drawn games being 3.

A combined total of 8 goals were scored between them during those clashes, with 2 for Lilák and 6 netted by MTK. The average goals per game has been 1.33.

The last league game featuring the two was Nemzeti Bajnokság I match day 23 on 02/03/2019 when it finished Újpest FC 0-0 MTK Budapest.

The referee was Péter Solymosi.

Újpest FC manager Predrag Rogan will be grateful not to have any fitness concerns to speak of ahead of this match with a fully injury-free squad ready to go.

Out of a mainly available group of players, there’s just the one fitness issue for the MTK Budapest manager Michael Boris to contend with. Srdjan Dimitrov (Ankle Injury) won’t be in action.

In our view, MTK Budapest and Újpest FC may both struggle to make a breakthrough here.

It will be interesting to see how this one goes, and it’s not easy to pick a clear winner. Our tip is therefore for a very even match with a 0-0 draw when all is said and done. 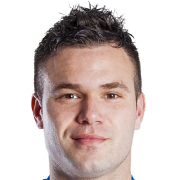 Mostly played in the Striker position, Antonio Perošević was born in Croatia. Having made a first senior appearance for NK Osijek in the 2009 - 2010 season, the skilful Forward has scored a sum of 2 league goals in this Nemzeti Bajnokság I 2020 - 2021 campaign so far in 5 appearances.

While we have made these predictions for Újpest FC v MTK Budapest for this match preview with the best of intentions, no profits are guaranteed. Always gamble responsibly, and with what you can afford to lose. Best of luck.