Return to this page a few days before the scheduled game when this expired prediction will be updated with our full preview and tips for the next match between these teams.
Full-Time Result Prediction for NK Osijek vs Dinamo Zagreb
Dinamo Zagreb to Win
NK Osijek will host visitors Dinamo Zagreb at Stadion Gradski vrt in this Prva Liga clash on Sunday.

We’re inclined to think that NK Osijek would be disappointed if they were not to get a goal against this Dinamo Zagreb outfit, although just one goal likely won’t be as many as they’ll concede. We’re therefore expecting a narrow 1-2 winning score for Dinamo Zagreb after 90 minutes. It should be a decent one. Scroll down for all of our predictions, poll and stats for the NK Osijek v Dinamo Zagreb game - as well as up-to-date odds. 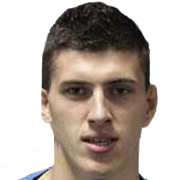 Mostly played in the Striker position, Mirko Marić was born in Grude, Bosnia and Herzegovina. After having made a senior debut playing for Lokomotiva Zagreb in the 2014 - 2015 season, the talented Forward has scored a sum of 15 league goals in this Prva Liga 2019 - 2020 campaign to date in a total of 21 appearances.

We have made these NK Osijek v Dinamo Zagreb predictions for this match preview with the best intentions, but no profits are guaranteed. Please always gamble responsibly, only with money that you can afford to lose. We wish you the best of luck.