Return to this page a few days before the scheduled game when this expired prediction will be updated with our full preview and tips for the next match between these teams.
Full-Time Result Prediction for Odense BK vs Lyngby
Odense BK to Win

We believe that Odense BK can and should stay in control for long periods of time and should be able to convert a few of the chances that they create. At the other end, Lyngby BK may well struggle to score themselves but we do think that it’s more than likely that they will be getting enough chances to score, too. We reckon that it will be a 3-1 winning score for Odense BK at the end of the match. Scroll down to see all of the predictions, poll and statistics for Odense BK v Lyngby BK (plus the best game odds).

Going into this contest, Odense BK haven't lost in the league to Lyngby BK in their last 2 games. 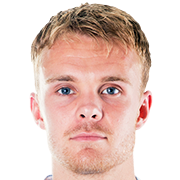 Mostly taking up the Right Attacking Midfielder position, Trols Kløve was born in Denmark. Having made his senior debut playing for AC Horsens in the 2010 - 2011 season, the gifted Midfielder has netted 2 league goals in the Superliga 2019 - 2020 campaign so far in 1 appearances.

While we have made these predictions for Odense BK v Lyngby BK for this match preview with the best of intentions, no profits are guaranteed. Always gamble responsibly, and with what you can afford to lose.