Viborg FF make the trip to Nature Energy Park on Thursday for the Superliga tie with hosts Odense BK.

Our full set of predictions, statistics and match poll for Odense BK v Viborg FF can be seen below (plus the best game odds).

Odense BK will play in this game after a 1-1 Superliga draw vs FC Nordsjælland.

Odense BK haven’t had any problems with scoring, finding the back of the net every time they’ve gone out to play in their last 6 matches.

They’ve claimed a sum of 10 during that time while also conceding a total of 4.

Taking a look at their past results, Odense BK:

In the game prior to this, Viborg FF drew 2-2 in the Superliga tie with Vejle BK.

The numbers tell their own story, and Viborg FF have been scored against in 5 of their last 6 games, seeing their opponents hit 8 goals in total. At the back, Viborg FF just haven’t been too solid at all. Having said that, time will tell if that trend might persist here in this match or not.

Coming into this fixture, Viborg FF haven't been beaten by Odense BK in away games against them for the last 2 league matches.

Checking out their prior head to head duels stretching back to 17/04/2016, it’s been all-even between these two clubs with Odense BK winning 1 of those games, Viborg FF 1 and 4 being drawn in regulation time.

In all, 17 goals were yielded between them throughout the course of those matches, with 10 for De Stribede and 7 coming from De Grønne. That’s an average goals per game figure of 2.83.

The previous league game featuring the two was Superliga match day 4 on 17/04/2022 when it ended Viborg FF 1-1 Odense BK.

That time, Viborg FF managed 42% possession and 15 attempts at goal with 5 of them on target. Their only player on the scoresheet was Clint Leemans (7').

The match was refereed by Aydin Uslu.

The Odense BK manager Andreas Alm has no fitness worries at all coming into this clash thanks to a fully injury-free group ready to go.

Owing to an otherwise full-strength squad, there is only the sole fitness issue for the Viborg FF manager Jacob Friis to be concerned with. Tobias Bech (Unknown Injury) misses out for this game.

Our assessment here is that Viborg FF might well have a job on their hands to get anything against this Odense BK team who should be able to grind out a win.

Our tip is therefore for a very competitive encounter with a 1-0 win for Odense BK at the conclusion of the game. 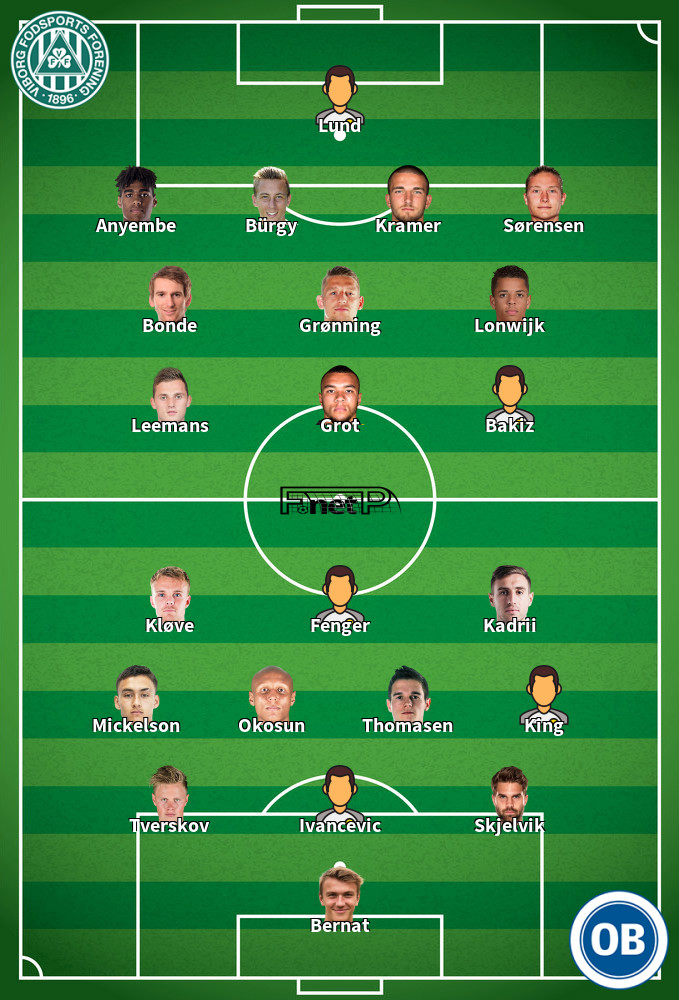 Customarily playing in the Striker position, Max Fenger was born in Denmark. Having played his first senior match for Odense BK in the 2019 - 2020 season, the accomplished Forward has accumulated 6 league goals in this Superliga 2021 - 2022 season to date in 28 appearances.

We have made these Odense BK v Viborg FF predictions for this match preview with the best intentions, but no profits are guaranteed. Please always gamble responsibly, only with money that you can afford to lose. Best of luck with your selections.