Our predictions, user poll and statistics for Volos v OFI Crete can be found here (plus the best game odds).

Volos prepare for this game coming off the back of a 0-0 Super League stalemate vs Panetolikos.

Over their prior 6 games, Konstantinos Bratsos's Volos have managed to score 7 times - an average number of goals per match of 1.17.

Their previous form shows that Volos:

OFI Crete will come into the encounter following on from a 1-0 Super League win with the eclipse of Asteras Tripolis in their last fixture.

In that match, OFI Crete managed 50% possession and 16 attempts at goal with 7 on target. The only player to score for OFI Crete was Luiz Phellype (72'). At the other end, Asteras Tripolis got 12 attempts on goal with 6 of them on target.

The numbers tell their own story, and OFI Crete have been scored against in 5 of their last 6 games, with opponents netting 8 goals in total. At the back, OFI Crete seem to have a bit of a soft underbelly.

Checking on their most recent head to head meetings stretching back to 04/01/2020 shows that Volos have won 2 of these and OFI Crete 3, with the number of draws standing at 1.

16 goals were shared by the two clubs during those clashes, with 6 for Volos and 10 belonging to Omilos. The average goals per game has been 2.67.

The previous league clash featuring these clubs was Super League match day 23 on 13/02/2022 when it finished OFI Crete 2-1 Volos.

On that occasion, OFI Crete managed 55% possession and 11 attempts at goal with 9 of them on target. The goalscorers were Praxitelis Vouros (19') and Jon Toral (33').

The referee was Ioannis Papadopoulos.

The Volos boss Konstantinos Bratsos has zero fitness concerns at all coming into this match thanks to a fully injury-free squad available to select from.

Due to a fully healthy group available to choose from, the OFI Crete manager Nikos Nioplias has zero fitness worries at all before this match.

Our feeling is that OFI Crete might well have a job on their hands to breach the defence of this Volos lineup who we think might well be able to grind out a win.

We therefore fancy a 1-0 victory for Volos at the end of this one. 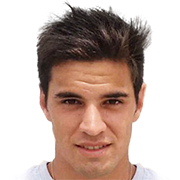 Usually played in the Central Attacking Midfielder position, Nicolás Oroz was born in Villa Mercedes, Argentina. Having played his first senior match for Racing Club in the 2013 - 2014 season, the goalscoring Midfielder has contributed 5 league goals in this Super League 2021 - 2022 campaign to date in 18 appearances.

While we have made these predictions for Volos v OFI Crete for this match preview with the best of intentions, no profits are guaranteed. Always gamble responsibly, and with what you can afford to lose. Good luck if you do place a bet today.