The Ligue 1 tie at Roazhon Park on Saturday sees home team Rennes prepare for the visit of Lyon.

View all of the Rennes v Lyon predictions, poll and stats below including the latest game odds.

Rennes prepare for this game after a 0-0 Ligue 1 stalemate vs Nantes.

Their latest results highlight the fact that much solidity has been shown by the Rennes backline. Rennes have been mean at the back, with the total number of goals that have flown into the back of their net during their last 6 outings standing at 4. That trend won’t necessarily be carried forward into this next game, though.

Going into this encounter, Rennes are unbeaten in their previous 2 league matches at home.

Lyon go into this game following a 3-2 Ligue 1 win against RC Lens in their most recent game.

Over the course of their previous 6 outings, Lyon have bagged the sum of 16 goals. Lyon have additionally got on the scoresheet in every single one of those games. During those fixtures, they have seen 6 goals scored by their opponents.

Looking at their past form shows that Lyon:

Inspecting their past head-to-head clashes dating back to 11/08/2017 shows that Rennes have won 4 of them & Lyon 2, with the number of draws standing at 0.

A combined sum of 14 goals were produced between them throughout the course of those matches, with 9 of them from Rennes and 5 being from Lyon. The average goals per game has been 2.33.

On that day, Lyon managed 53% possession and 10 attempts at goal with 3 on target.

For their opponents, Rennes had 12 attempts at goal with 6 of them on target. Eduardo Camavinga (89') scored.

Lyon boss Rudi Garcia has to choose from a squad that has some fitness concerns. Bruno Guimarães (Corona virus) and Moussa Dembélé (Fractured Arm) will not be playing here.

Here is a game where Rennes will need to push hard to break down this Lyon lineup who we think will likely just have the edge.

That’s why our selection here is for a hard-fought contest, finishing with a 0-1 advantage for Lyon at full-time. 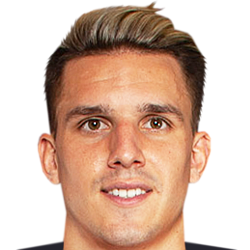 Normally taking to the field in the Centre Midfield position, Adrien Hunou was born in Evry, France. After making a first senior appearance for Rennes in the 2013 - 2014 season, the skilful Midfielder has scored a sum of 4 league goals in this Ligue 1 2020 - 2021 campaign to date in 13 appearances.

We have made these Rennes v Lyon predictions for this match preview with the best intentions, but no profits are guaranteed. Please always gamble responsibly, only with money that you can afford to lose.