Oxford United journey to DW Stadium on Saturday for the League One fixture with home side Wigan.

All Wigan Athletic v Oxford United match predictions, user poll and stats are shown below - plus the latest match odds.

Wigan are hoping to win again after their last result, a 2-0 EFL Trophy triumph vs Shrewsbury Town.

Wigan Athletic haven’t had any problems with scoring, hitting the target in one hundred percent of their last 6 matches.

They have claimed a sum of 11 during that period and have conceded a total of 6.

Going into this encounter, Wigan Athletic have not beaten Oxford United in their previous 2 league games.

Last time out, Oxford United drew 0-0 in the League One match with Ipswich Town.

In the course of their six previous matches, Karl Robinson's Oxford United have had reason to celebrate scoring a total of 12 times, giving them a goals per game average of 2.

Going into this encounter, Oxford United are undefeated in their previous 2 away league matches.

A glance at their prior head to head clashes going back to 24/10/2000 tells us that Wigan have won 4 of these games and Oxford United 2, with the tally of drawn matches standing at 0.

21 goals were produced between them in this period, with 15 of them for The Latics and 6 created by The U's. That is an average goals per game value of 3.5.

The last league contest featuring these clubs was League One match day 29 on 14/02/2021 when the final score was Oxford United 2-1 Wigan Athletic.

The referee was Brett Huxtable.

The Wigan manager Leam Richardson will be thankful to have no fitness concerns at all ahead of this game thanks to a completely injury-free squad ready to go.

Due to a fully injury-free squad available to choose from, the Oxford United manager Karl Robinson doesn’t have any fitness concerns at all before this game.

We’re inclined to think that Oxford United will likely be able to find the net against this Wigan Athletic side, although that possibly won’t be as many as they will have scored against them.

We reckon that it will be a narrow 2-1 victory for Wigan Athletic after the 90. It really should be an interesting one. 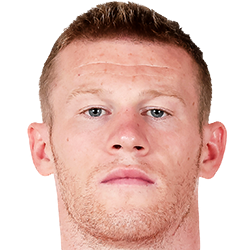 Usually taking to the field in the Left Attacking Midfielder position, James McClean was born in Derry, N. Ireland. Having played his first senior match for Derry City in the 2008 season, the goalscoring Midfielder has scored 5 league goals in the League One 2021 - 2022 season to date in 13 appearances.

While we have made these predictions for Wigan Athletic v Oxford United for this match preview with the best of intentions, no profits are guaranteed. Always gamble responsibly, and with what you can afford to lose.