Return to this page a few days before the scheduled game when this expired prediction will be updated with our full preview and tips for the next match between these teams.
Full-Time Result Prediction
👉
Palermo to Win

The Serie B game at Stadio Renzo Barbera on Sunday sees home team Palermo ready themselves for the visit of Venezia.

All Palermo v Venezia game predictions, stats and user poll are shown below - as well as up-to-date odds.

Palermo will be looking to improve on their last outing here after the 3-2 Serie B loss in their previous game against Cosenza.

Eugenio Corini's Palermo have found the net a sum total of 8 times over their prior six outings. The corresponding tally of goals that they have conceded in those fixtures amounts to 9.

Analysis of their past results shows that Palermo:

Following on from tasting defeat last time out to Reggina in Serie B competition, Venezia and their fans will hope to get a better result this time.

The numbers tell their own story, and Venezia have been scored against in 6 of their last 6 matches, seeing opposing sides hit 11 goals in total. Defensively, Venezia have seen their frailties exposed. It will be interesting to find out if that trend can be continued on into this next match.

Their previous form shows that Venezia:

Checking out their prior head to head duels dating back to 02/12/2017, there is nothing to separate the two clubs with Palermo winning 1 of those games, Venezia 1 and 4 being drawn in normal time.

A combined total of 10 goals were shared by the two clubs in this period, with 4 of them for Rosaneri and 6 belonging to Arancioneroverdi. That’s an average goals per game figure of 1.67.

The previous league contest featuring these sides was Serie B match day 28 on 11/03/2019 and the score finished Venezia 1-1 Palermo.

In that game, Venezia had 45% possession and 6 shots at goal with 2 on target. Their only player to score was Riccardo Bocalon (39').

At the other end, Palermo got 11 shots at goal with 5 of them on target. George Puşcaş (84') scored.

The referee was Riccardo Ros.

Looking at personnel, there is just the lone fitness concern for the Palermo gaffer Eugenio Corini to contend with from a near full-strength squad. Salvatore Elia (Cruciate Ligament Surgery) misses out. Ivan Marconi is ineligible for this match because of suspension.

Due to a completely healthy squad available to select from, the Venezia boss Ivan Javorčić has zero fitness worries at all coming into this match. Ridgeciano Haps is ineligible for this match because of suspension.

We’re inclined to think that Venezia certainly have the ability to find the back of the net against this Palermo side, however that is unlikely to be enough to avoid defeat.

We think that it’s going to be a very close game with a 2-1 win for Palermo after 90 minutes. Let’s just see how this one goes. 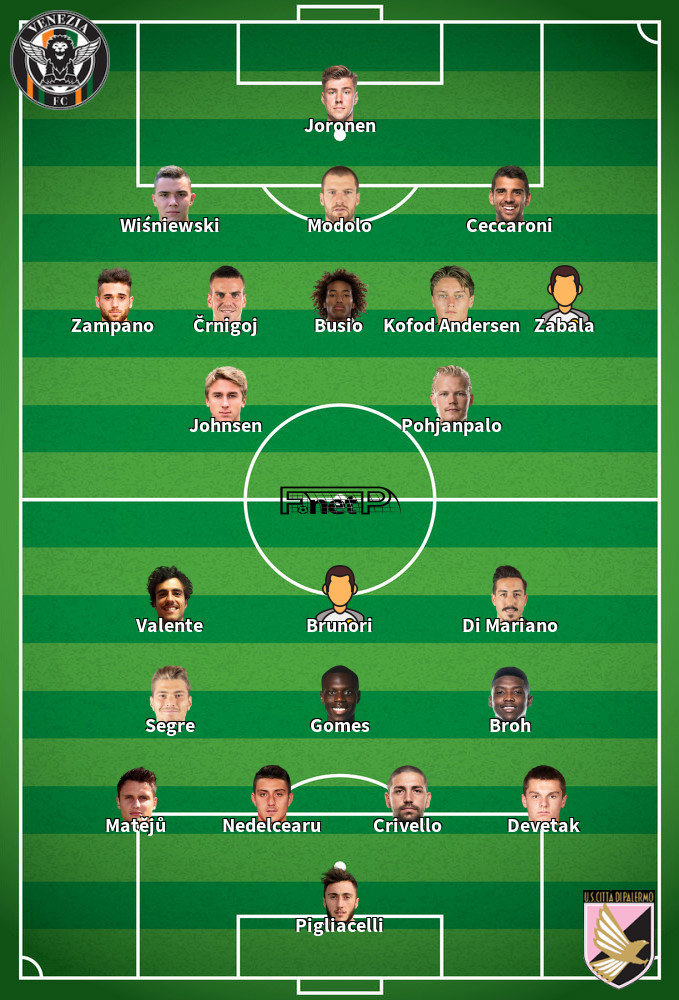 Mostly deployed in the Striker position, Matteo Brunori was born in Macaè, Brazil. After having made a senior debut playing for Pescara in the 2019 - 2020 season, the dangerous Forward has managed 6 league goals in this Serie B 2022 - 2023 campaign so far coming from a total of 13 appearances.

While we have made these predictions for Palermo v Venezia for this match preview with the best of intentions, no profits are guaranteed. Always gamble responsibly, and with what you can afford to lose. Good luck!